The first of MARAD’s purpose-built training vessels for the U.S. maritime academies marked a milestone in its construction in the program that will see five of the state academies each receive new vessels. The Empire State VII, which has been assigned to the State of New York (SUNY) Maritime College, was floated from the dry dock on September 24 nine months after the keel was laid for the vessel.

The National Security Multi-Mission Vessel (NSMV) program officially began in 2019 when MARAD awarded a construction management contract to TOTE Services. TOTE is overseeing the construction of the program that has been expanded to five vessels and awarded the construction contracts to Philly Shipyard.

Historically, MARAD has provided ships from the National Defense Reserve Fleet as training vessels for the state maritime academies but for the first time under the program the outdated ships are being replaced with modern ships specially designed for training. They are also designed to provide humanitarian assistance and disaster relief in times of need. 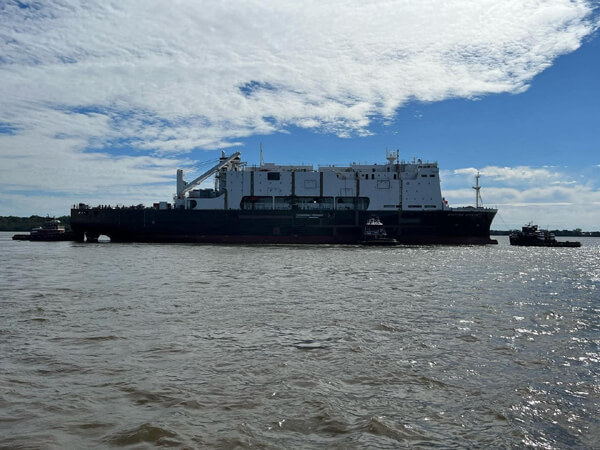 SUNY was selected to receive the first of the ships as it has the oldest of the training vessels. The Maritime College's current training ship, Empire State VI, was built in 1962. It has been used to educate and train students since 1989. The ship's technology is aging and the pending stringent environmental regulations would limit the ship's future voyages.

Construction of the new class of ships began in December 2020 when first steel was cut for the first vessel. Assembly began with the keel laying ceremony a year later while steel for the second vessel was cut in March 2021 and the third in July 2022.

Following its launch, Empire State VII was guided into its new berth by tugs in preparation for final outfitting, testing, and commissioning. The Empire State VII is expected to arrive at the Maritime College in the spring of 2023. 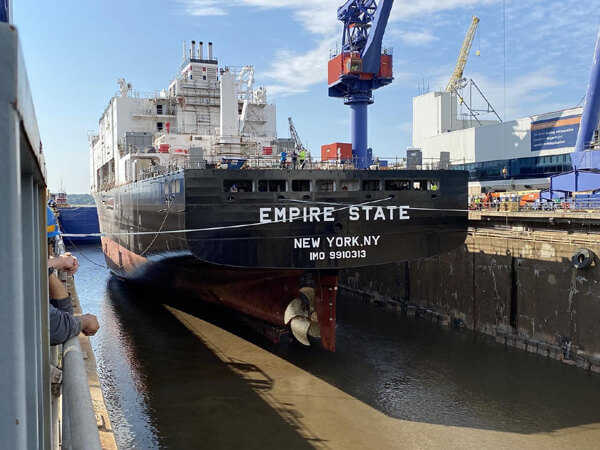 Each of the vessels will measure 525 feet in length with an 89-foot beam. They are designed with a sailing range of more than 10,000 miles at 18 knots. Each vessel also has bow and stern thrusters and a modern diesel power plan that includes four engines split between two engine rooms.

The design for the ships includes numerous training spaces with eight classrooms, a full training bridge, lab spaces, and an auditorium. Each will accommodate up to 600 cadets at sea. They also have roll-on/roll-off and container storage, with a cargo crane and side ramp for self-loading. Each ship will also feature modern hospital facilities, a helicopter pad, and can accommodate up to 1,000 people during disaster relief missions.

The Empire State VII is part of an effort designed to address a critical shortage of qualified officers necessary to crew government and commercially owned ships. The state maritime academies graduate more than half of all new officers annually for the U.S. merchant marine.

In addition to New York, MARAD has contracted Philly Shipyard to build four training ships for state maritime academies in Massachusetts, Maine, Texas, and California. The second and third ships are slated for delivery to Massachusetts and Maine maritime academies in 2024. The fourth vessel, due in 2025 has been assigned to Texas A&M Maritime Academy while the fifth vessel was ordered in April 2021 and is assigned to the California State University Maritime Academy due to complete the program in 2026.