The first conversion of a Very Large Gas Carrier (VLGC) to Liquefied Petroleum Gas (LPG) dual-fuel propulsion has been completed with the ship, the BW Gemini, starting weeklong sea and gas trials. The conversion is part of a program that BW LPG is undertaking to retrofit vessels in its fleet to the more efficient and environmentally sensitive fuel.

Built in 2015, the LPG tanker BW Gemini is a 54,500 DWT vessel with an overall length of 738 feet. It has a carrying capacity of 84,000 cubic meters of gas. The vessel was retrofitted at Yiu Lian Dockyard in Shenzhen, China in a process that took approximately 60 days and involved the fitting of deck tanks for the gas. The 900 cbm tanks each weigh 89 tons and measure 115 feet in length and 20 feet in diameter. Made of low-temperature steel with a thick insulation material all around, the tanks store LPG which will be used to power the LPG dual-fuel propulsion engine. 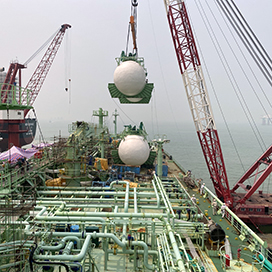 According to BW, the main engine will be able to seamlessly switch between traditional fuel and the LPG. Using LPG as fuel for propulsion the company says is both a pioneering and promising solution for sustainable shipping as they pursue decarbonization and sustainable operations. The retrofit process helps the company achieve its goals and meet regulations without the need for dedicated newbuilding orders.

BW Group, which is one of the world’s largest ship operators with a fleet consisting of over 360 ships, product and crude oil tankers, LNG and LPG carriers, floating storage and regasification (FSRU) units, and dry cargo carriers, announced in August 2018 its intentions to initially retrofit four vessels with LPG-propelled dual-fuel engines. The conversions were expected to begin in early 2020 timed to the vessels planned drydocking schedules, but were delayed for a few months by the strong market conditions earlier in 2020 and additional preparations as a result of the coronavirus.

Before the conversions began, BW announced that it had exercised options first increasing the program to eight and then 12 vessels in total. The first of the conversions, the BW Gemini began in August and the second the BW Leo arrived at the Yiu Lian Dockyard in late September to begin the conversion process.

In addition to the environmental benefits, BW says that it expects efficiency gains on many fronts through the use of LPG as a marine fuel. They forecast that output efficiencies will improve by approximately 11 percent with LPG when compared with compliant fuels, creating significant improvements in total voyage fuel economics. Other efficiencies gained with LPG BW said include easy storage, faster refueling, and wide availability of bunkering ships and facilities. BW believes that LPG is a long-term sustainable marine fuel, but the installation is believed to be prepared for potential conversion to ammonia as a fuel in the future.

BW LPG, said in 2020 when it announced the expansion of the retrofit program, that working with DNV GL, Wärtsilä Gas Solutions, and MAN ES, they had subjected the prototype to rigorous tests with the performance exceeding expectations. The stronger-than-expected performance during rigorous type-approval tests was credited with the decision to exercise the options to expand the program to 12 vessels.

The plan called for the first four vessels to be retrofitted in 2020 and the remainder of the project to be completed in the first half of 2021.

Hurtigruten is reporting a breach of consumer information in the recent cyberattack the shipping company experienced in December 2020. At the time, it was believed to be a significant attack. The company had taken systems offline while it investigated. According to the details Hurtigruten released today, an unauthorized individual encrypted the computer systems relating to two of their ships, the Fram and Midnatsol. The data impacted encompassed guests that sailed aboard the Fram between 2018 and 2020 and for guests...

Prosecutors in the Sicilian city of Ragusa have accused an NGO rescue vessel operator of receiving money in exchange for taking 27 rescued migrants off of a Maersk product tanker last year.  The vessel in question was the Maersk Etienne, which was stranded off Malta for more than five weeks after Maltese officials refused to allow a group of rescuees to disembark. The tanker's crew saved 27 maritime migrants in the Mediterranean in August 2020, but when she transited to...