First Autonomous Navigation and Berthing Test on a Containership

A Japanese containership completed the world’s first sea trial for unmanned navigation with a containership including docking and undocking. The test, which was led by companies in the Mitsui group, is part of an ongoing demonstration program sponsored by The Nippon Foundation to develop autonomous shipping.

The containership trial was undertaken by Mitsui O.S.K. Lines using a seven-year-old coastal containership, the Mikage, which is operated by Imoto Lines. The 1,870 dwt vessel, which measures 313 feet in length and has a carrying capacity of 194 TEU, was outfitted with a series of systems developed by partners in the consortium. The trial voyage was conducted on January 24 and 25, departing the Tsuruga port on the Sea of Japan and traveling approximately 161 nautical miles arriving in the Sakai port near Osaka.

For autonomous navigation, the ship followed a previously formulated route using a system developed by Mitsui E&S Shipbuilding that conducted the judgments overseeing the operations. Among the elements that factored into the system, was accurate location information, various external elements such as wind, tides, and currents, as well as ship specific information on its configuration, maneuverability, and ability to accelerate and decelerate. Furuno Electric developed an autonomous system that through integrating radar, camera images, and AIS data provided details on other ships and obstacles near the vessel.

According to the consortium, one of the most challenging parts of the voyage was the autonomous berthing and unberthing which requires especially delicate handling. Furuno Electric developed a system of support sensors that using data from LiDAR, cameras, and a satellite compass calculated and visually displayed the relative distances and angles between the pier and hull. 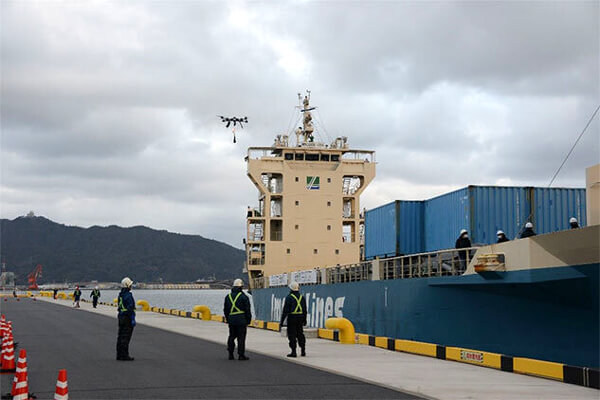 Normally there would be crew members on the ship to provide visual confirmation during the docking operation and also to pass the ship’s lines to the longshoremen to tie up the vessel. For this trial, A.L.I. Technologies developed the mooring support technology, which used drones to carry the line to the pier.

The MEGURI 2040 fully autonomous ship navigation project began in February 2020 with The Nippon Foundation overseeing five different consortia that are each developing systems and will be conducting demonstrations in the first months of 2022 on their fully autonomous navigation system concepts. The goal of the project is to employ autonomous navigation systems to address issues of improved safety, reducing crew labor requirements, and reducing costs. Last week, Mitsubishi Shipbuilding demonstrated a system on a large car ferry.

Mitsui’s project includes conducting sea trials with two different types of ships, a containership and a ferry, to identify similarities and differences in their navigation and increase the versatility of the technology. This was also the first test that integrated the mooring operations with the use of drones.

In February, the Mitsui group plans to test their autonomous navigation system on a coastal car ferry, the 21-year-old Sunflower Shiretoko. The 11,400 gross ton ferry owned by MOL Ferry has different characteristics from the coastal containership and the goal is to operate a voyage between Tomakomai in northern Japan to Oarai in central Japan.