The fire aboard the VLCC New Diamond has reignited less than a day after authorities announced that it had been extinguished. High internal temperatures aboard the crude oil tanker combined with high winds, which were also causing adverse sea conditions, are being blamed for the reignition.

The authorities had warned yesterday, September 6, that it was possible that the fire would reignite due to the onboard temperatures on the ship. Fearing a possible reoccurrence, they had been continuing their efforts spraying the ship with water to cool the area. They had also continued to apply fire smothering chemicals in an attempt to disrupt the oxygen supply to the fire which is believed to still be burning in the engine room of the ship.

They are also continuing to monitor for the possibility of oil leaks either from the engine room or from the crude oil cargo. The New Diamond was fully loaded with a cargo of approximately two million barrels of crude oil being shipped from Kuwait to an oil refinery in India. The tanker was also reported to have 1700 metric tons of diesel fuel aboard.

The firefighting efforts resumed with a total of nine ships on-site from India and Sri Lanka. They are being assisted by five tugboats including commercial salvage tugs dispatched to the site by the vessel’s owners. In addition, aircraft from the Indian Coast Guard and Sri Lanka Airforce are assisting including have resumed airdrops of water onto the fire. Over the weekend, the Sri Lanka Airforce, for the first time in its history, used helicopters flying at low altitudes to drop dry powder packages onto the fire. 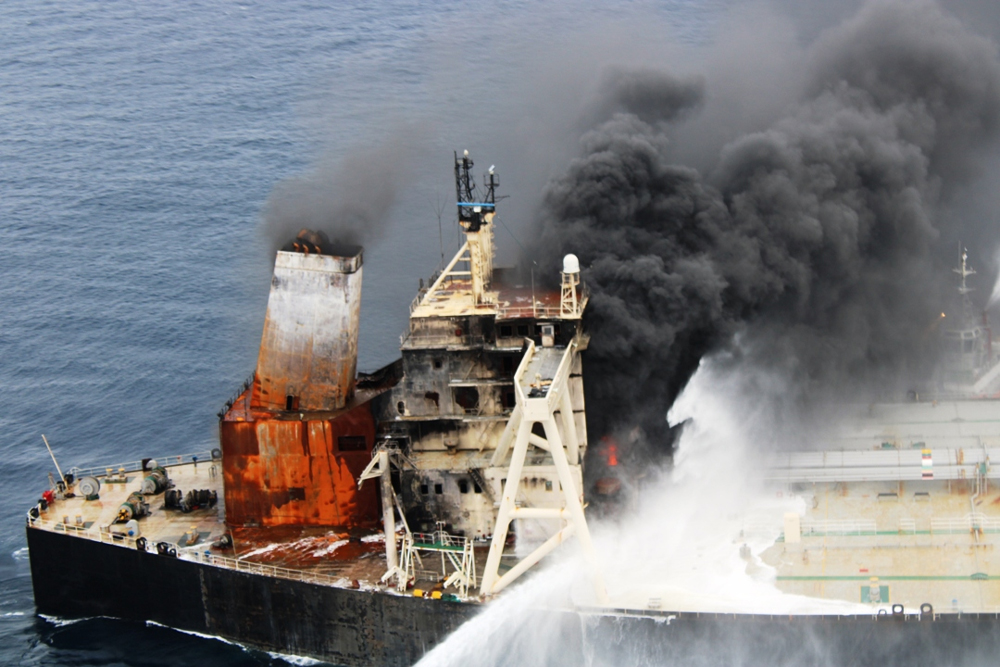 Photos courtesy of the Indian Navy

The Indian and Sri Lanka teams were also joined by salvage experts from SMIT who has been hired by the vessel’s owners to lead the efforts. The owners also arranged for a team of 11 disaster management experts with specialists in disaster evaluation, rescue, and legal to join the efforts. The teams arrived in Sri Lanka on September 7 and were being transferred to the site by the Sri Lanka Navy.

The fire initially broke out early on the morning of September 3 after a reported explosion in the engine room of the tanker. Initially, the authorities thought that they had been able to contain the fire to the engine room, but it spread engulfing the deckhouse and bridge area on the stern of the vessel. Twenty-one of the vessel’s crew were safely evacuated and at last report aboard a Sri Lankan navy ship while the authorities arranged for the crew to telephone home and worked to maintain COVID-19 protocols as a first step to repatriating the crew. One engineer from the New Diamond was hospitalized in Sri Lanka suffering from burns and one crew member from the engine room was reportedly killed in the initial explosion.

The New Diamond at last report is approximately 30 nautical miles off Sangamankandu Point on the eastern coast of Sri Lanka. The Indian Navy along with the salvage team had hoped to board the vessel today to complete an inspection to aid in the formulation of a salvage plan.