A fire broke out in the hold of a Singapore-flagged cargo ship in New Zealand’s Napier port today. Operations in the port were briefly suspended while local fire crews were brought in to fight the fire.

Fire and Emergency New Zealand reported that it was called to the Napier Port at 10:45 a.m. local time. Crews arrived on scene to find smoke billowing from one of the forward holds of Pacific International Lines’ vessel the Kota Bahagia. There were also unconfirmed reports of several large explosions. The 24,964 DWT vessel had arrived overnight at the port from China and was reported to be carrying general cargo as well as possibly parts for a wind turbine.

The ship’s crew was evacuated to the pier and all were accounted for according to port officials. The captain and engineers remained on scene to assist with fighting the fire while the other crew members were moved to a safe location within the port. Because of the pandemic and local restrictions which place arriving crews under a 14-day quarantine, all crew members were tested for the virus. The health authorities reported all of the crew tested negative for COVID-19.

A total of 11 fire crews from neighboring areas were all dispatched to the port. Firefighters and the ship’s engineers were reported to be aboard fighting the fire. Additional fire crews also cooled the sides of the ship with water. 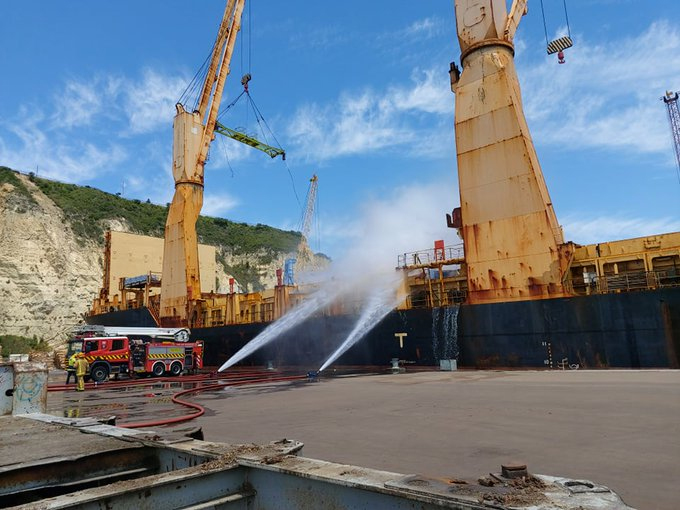 Unfortunately for the port, the fire broke out as it was also conducting its annual meeting according to local media reports. Port officials left the meeting due to the fire. A port spokesperson said the meeting continued but tours of the port had to be canceled. Residents were also advised to remain indoors due to the smoke drifting into surrounding communities.

Port operations were suspended during the fire fighting efforts as well as operations on a nearby commuter railroad. The port expected that container operations would resume in the morning while the bulk cargo operations were due to resume this afternoon.

In just under three hours after the alarm, Fire and Emergency New Zealand reported that the fire was under control. Crews continued to cool down the ship while the fire department continued to work with the ship’s captain and engineer.

New Zealand’s Transport Accident Investigation Commission announced that it would be opening an investigation into the fire that originated in the hold. Harald Hendel, the Chief Investigator of Accidents, said in a statement that two investigators with “expert knowledge of marine operations, engineering, maintenance, and electronic forensics,” would travel to Napier on December 19. "Their initial work will include interviewing witnesses and inspecting affected parts and cargo of the ship when safe to do so," said Hendel.