German, Belgian, and Dutch authorities working in concert completed what they are calling Europe’s largest cocaine seizure and one of the largest individual seizures in the world. In total, 25 tons of the narcotics were seized at the ports in Hamburg and Antwerp with the Dutch authorities reporting a value of more than $700 million while the German authorities estimated the ultimate street value could have been as high as $4 billion.

Authorities have recently reported that the pandemic is causing drug smugglers to become more brazen in their methods. They have also been sending larger individual shipments via multiple ports in order to deal with the disruption to global trade during the pandemic.

Dutch customs had become suspicious of the shipment and flagged it for investigation. The European custom authorities performed an extensive risk analysis altering the German port authorities regarding three containers bound for Hamburg. The containers had been loaded on an unidentified ship in Paraguay traveling to Tangier and Rotterdam before being landed in Hamburg.

German customs inspectors examined the shipment which reached Hamburg on February 12. The examination of the containers found they were loaded with 1,728 cans of putty used in construction to fill holes and smooth cracks in a wall. Testing the tins, the German authorities said “clear irregularities were found in three containers.” Opening the individual cans, they discovered eight packets of cocaine hidden in each of the canisters below a layer of the putty. In total 17.6 tons of cocaine were seized from the three shipping containers. 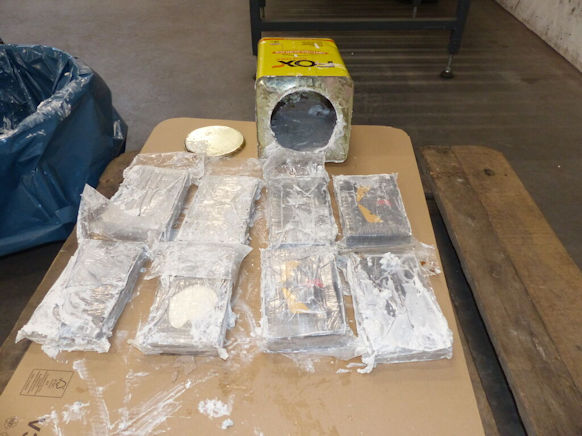 The German and Dutch authorities believed that the three shipping containers were to have been transshipped to an import company with offices in Rotterdam and Bleskensgraaf in the Netherlands.

Dutch police and the prosecution service began a criminal investigation and discovered information linking the same company to a second shipment of 11 containers on their way from Panama to Antwerp. The bill of lading reported they were loaded with pineapples, mackerel, squid, and wood.

Belgian customs was alerted and inspected the containers after they were landed in Antwerp on February 20. An additional 7.2 tons of cocaine was found hidden with the wood in one of the shipping containers. While they were inspecting the containers, an intermediary arrived at the port attempting to claim the shipment.

“Never before has so much cocaine been intercepted at once,” the Dutch police reported. Continuing the investigation, they searched the home of a 28-year-old man from Holland and arrested him for arranging the transport of the drugs. Also, they searched the business locations in Rotterdam and Bleskensgraaf.

In a statement to the media, Germany’s Federal Minister of Finance, Dr. Rolf Bosinger cited the strong cooperation of the European partner authorities in effecting the drug bust. He also noted that their strategy of strengthening customs operations was working, helping to intercept illegal shipments.