Greek authorities have approved towing the wreck of the Ro/Ro ferry Euroferry Olympia to port, although the vessel continues to burn. The fire service advised that with weather conditions expected to deteriorate that it was the best option, although the families of the 10 people still missing are objecting as the tow will delay further searches of the vessel.

Fire crews were forced to retreat on Tuesday after having fought the fire for five days and ongoing efforts attempting to cool the hull of the vessel. Reports were of heavy fire and explosions coming from the forward part of the vessel late on Monday and into Tuesday. Fire officials said that the fire had spread forward reaching the storage lockers that contained paint, turpentine, and other combustible materials.

The fire crew had been using thermal imaging cameras and going aboard to search the vessel. Reports indicated that temperatures in the stern of the vessel had fallen but remained near 300 degrees Fahrenheit while temperatures were near 570 degrees in the forward sections of the vessel. Fire crews were also encountering thick smoke and toxic fumes forcing them to limit their time inside the vessel to 30 minutes and in places they said they can not see more than 30 feet.

The fire service advised the Hellenic Coast Guard and Ministry of Shipping that they has exhausted the search in the vessel’s current location and recommended transferring it to a safe port. The ministry approved the salvage company being a slow speed tow at more than four knots to move the Euroferry Olympia to the port of Astakos in southwest Greece. The families were angered that the search is being suspended and that the vessel was not being brought to Corfu where the evacuees remain. The ministry said it would move the families of those missing to Astakos to assist with the ongoing search and investigation. 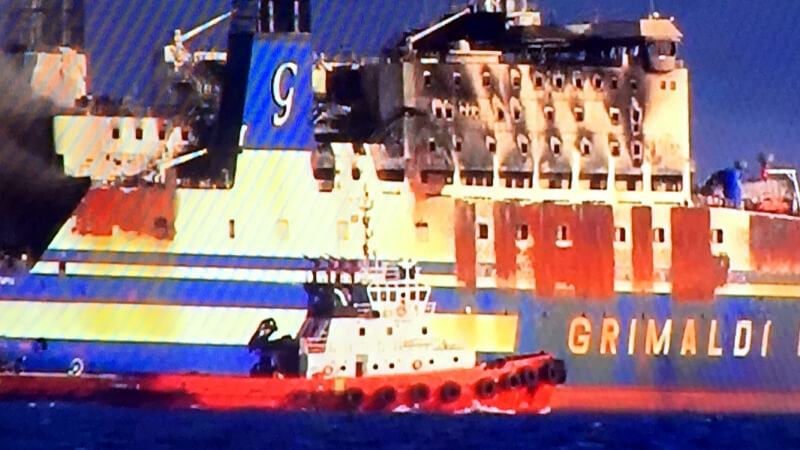 The Euroferry Olympia is not expected to reach port till possibly mid-day tomorrow. The vessel has reportedly taken on a slight list due to the extensive amount of water sprayed to douse the fire and cool the structure. The list and conditions on the ship were being complicated by weather conditions in the Ionian Sea.

Efforts to assemble a complete manifest for the vessel are being complicated by reports of multiple stowaways who came aboard illegally in Greece. Media reports in Greece initially suggested that one stowaway was among those evacuated on Friday and now that one of the drivers later rescued from the ship was not on the manifest.

Italy’s Grimaldi Group is also responding to criticisms over the condition of the vessel. The Greek Union of Professional Truck Drivers (SEOFAE) issued a statement citing poor and unsafe conditions on the vessel. Grimaldi responded saying that the vessel had been inspected just two days before the fire. “The good conditions of the vessel were, in fact, confirmed last 16th of February in Igoumenitsa, where the Euroferry Olympia underwent a Port State Control inspection (smoke detection and firefighting systems included) by Greek authorities, which ended with satisfactory results,” the company said in its statement. The Equasis database shows four deficiencies in the inspection, including the fire safety operation booklet being incomplete and citations that the accommodation, recreation, and food areas were dirty and not properly maintained. The vessel had similar issues on prior inspections but was not detained.

Grimaldi refuted other claims about the vessel saying that under international regulations passenger access to the garage was forbidden while the vessel was at sea and that any drivers remaining in their vehicles were in violation of laws. They said the crew checked the area before departure and maintained patrols during navigation. Grimaldi said their systems did not permit overbooking and that the vessel was operating well below capacity during the trip with accommodations designated for the drivers.

A total of 281 people were evacuated from the vessel on February 18. Rescue teams saved two drivers that had been trapped below decks airlifting them off the vessel later on Friday and Sunday another survivor made his way to deck. One body has been recovered with 10 people missing according to the manifest.