Estonian Cargo Ship Sinks After Possible Mine Strike Near Odesa

An Estonian-owned small cargo ship sunk in the Black Sea earlier today with conflicting reports that the vessel may have been struck by a mine or that Russian forces had commandeered the ship as they prepare for an amphibious assault on Odesa. Earlier reports of missing crew members have been revised by the Estonian Ministry of Foreign Affairs that later said all six crew members had been accounted for and were safe.

Helt, a 2,086 dwt cargo ship registered in Panama was reported to have been at anchor approximately 20 miles south of Odesa when the vessel was shaken by a large explosion. Crewmembers issued a “mayday” call on Channel 16 and abandon ship into a life raft. The crew reported that the vessel had taken on a 70-degree list with two crew in one raft and four others unaccounted for in the early reports.

Speaking to the ship manager, Vista Shipping Agency in Estonia Reuters reported that the vessel had sunk. Thursday afternoon, the Estonian Ministry of Foreign Affairs confirmed the incident saying the circumstances “are still not clear and it is not known exactly what caused the sinking.” The Ministry said all six crewmembers had been safely rescued. 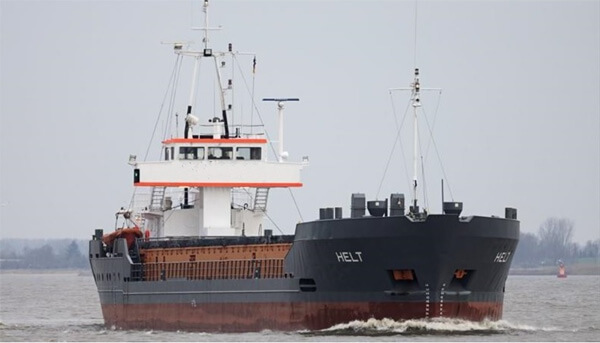 Reporting from Dryad says that the information they obtained stated that the vessel was fired upon and received a hole below the waterline. Images and reporting seem to indicate that the vessel struck a mine.

The incident comes hours after the northern half of the Black Sea and all the Sea of Azov was designated as "Warlike Operations Areas." Yesterday, NATO issued a warning to all commercial shipping citing the previous attacks on merchant shipping during the first week of the war and warning that it was likely that sea lanes in the northern Black Sea had possibly been mined.

Warning of the risk of collateral damage in the north western Black Sea, NATO wrote in its alert, “Shipping is encouraged to stay well informed about these and keep well clear of the areas as well as warships and military crafts. It should always be taken into account that the situation may develop further during a voyage.”

This is believed to be the fifth merchant ship that has been caught in the crossfire of the war. Last week three vessels reported being hit with one small product tanker on fire. Yesterday, the first seafarer casualty was reported when a missile struck a Bangladeshi bulker killing the vessel’s third officer who was reportedly on watch at the time of the strike. The loss of Helt would be the first confirmed sinking of a merchant ship in the war on Ukraine.