On Monday, Eastern Shipbuilding Group and its industry partners commissioned a new production facility that will support the integration of electronics and sensor systems for the U.S. Coast Guard's new Offshore Patrol Cutter program.

The new, dedicated shore-based facility is tailored to the build-up, integration, and testing of the OPC's C5ISR system prior to installation aboard the ship. According to ESG, keeping this activity close to the ship construction site reduces risk and costs, and it increases efficiency and collaboration between vendors. It is large enough to hold two full-scale mockups of the shipboard C5I operations spaces and the OPC's bridge. By setting up the electronics off the hull first, this approach will help keep the vessel construction schedule on track.

ESG completed construction of the facility in November of 2019 at its Allanton shipyard, with support from Florida state legislative appropriation funds. The shipbuilder received test readiness approval from the USCG and began formal testing in August 2021. 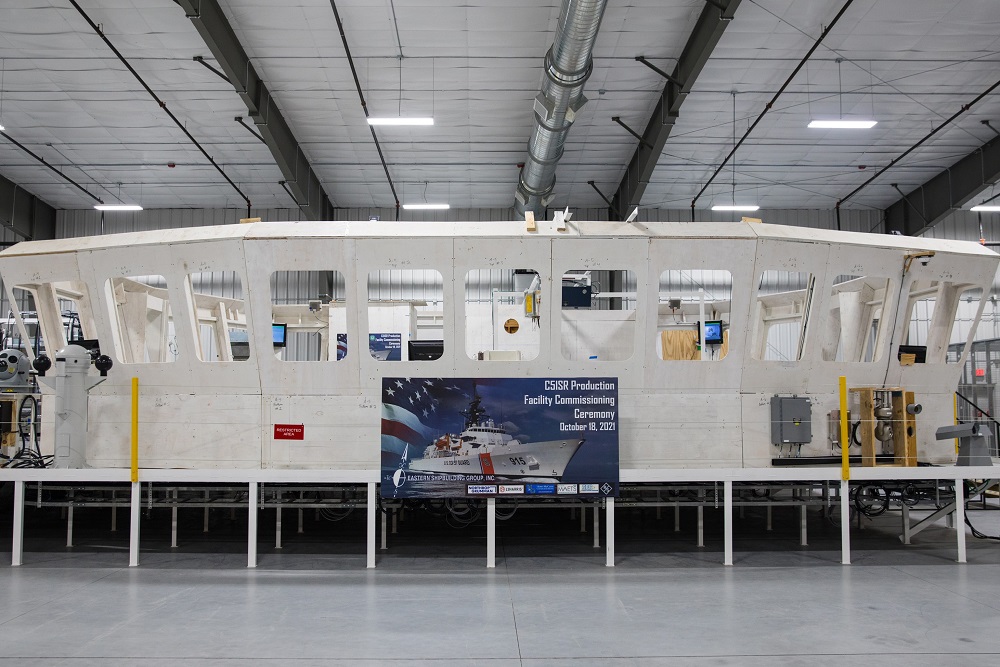 “The commissioning of this C5ISR production facility is a significant event for our company and the program. I believe this is the first-ever on-premises C5ISR facility of a major DHS marine construction program, and it is specifically designed to reduce risk for the USCG," said Joey D’Isernia, President of Eastern Shipbuilding Group. "Facilities of similar size, scope and complexity are not co-located at other shipyards and thus cannot provide these benefits."

The facility will also be used to provide C5ISR factory training and familiarization training for the OPC crewmembers, using the full suite of shipboard electronic equipment in full-scale mockups.

ESG has already completed the first OPC hull and has two more under construction. It is now competing for the next phase of the OPC contract, which covers the next 11 vessels in the series. It is a massive, multi-billion-dollar deal, and Eastern is pulling out all the stops. The company has set aside the entirety of its Nelson Street shipyard complex for the OPC, and it is building a new aluminum fabrication facility to facilitate construction of the OPC's deckhouse structure.