Timed to the opening of the One Ocean Summit being hosted in France this week, environmental activists are staging a series of events to call attention to their demands for an international moratorium on deep-sea mining. Greenpeace is planning a demonstration at the conference in Brest, France for later this week, while yesterday in Rotterdam activists again targeted a vessel being outfitted at the port for deep-sea mining operations.

The One Ocean Summit began today in Brest, France hosted by French President Emmanuel Macron in his role leading the Council of the European Union, and with the support of the United Nations, and attended by representatives from nations around the globe. The goal of the summit is to raise the collective level of ambition of the international community on marine issues and to develop tangible commitments for the global responsibility to the ocean as part of a year-long initiative designed to develop commitments to protect the ocean and reverse its declining health.

One of the key issues on the agenda for the environmental activists is discussions on a treaty for the oceans and against deep-sea mining. Greenpeace has long been advocating for the treaty with its Protect the Oceans campaign. The environmental group reports that it has more than 3.7 million signatures on a petition and that it is in Brest to highlight the importance of President Macron taking leadership in the negations with the European community. Greenpeace is calling on France to represent the demands of the citizens of the world and says it is there to ensure that “a treaty that meets the expectations of civil society is ratified.” The final meeting for the treaty is scheduled for New York in March.

Greenpeace along with other organizations including Ocean Rebellion and Extinction Rebellion Rotterdam are working in unison to lobby against the mining of seabeds. Greenpeace contends that the mining could cause “irreversible and inevitable damage to marine biodiversity, and aggravate the climate crisis by disrupting the stocks of blue carbon in the seabed.” 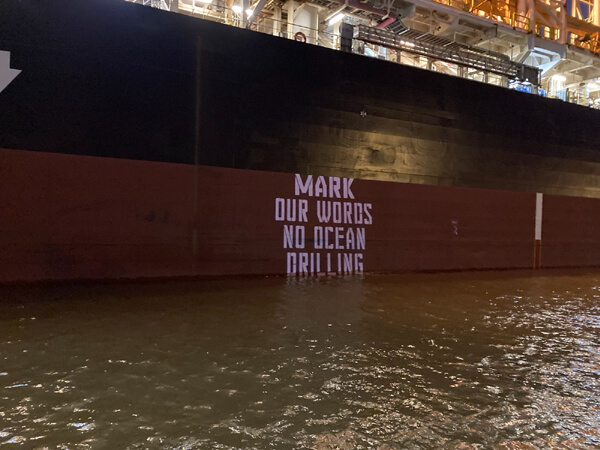 Protestors from Ocean Rebellion yesterday sought to highlight their demands by demonstrating alongside a vessel called Hidden Gem, owned by a Dutch-Swiss partnership Allseas which is working with Canadian company The Metals Company to prepare the deep-sea drilling ship for a new role in ocean mining. Using the drill ship and unmanned vehicles, they plan to suck growths from the ocean floor in the Pacific that contains manganese, cobalt, and lithium, all of which are used in the production of batteries for cell phones and vehicles.

A group of protestors dressed as a whale, an anemone, and a jellyfish danced and held banners while a choir sang cynical songs about the greed and destruction of the seabed alongside the drillship. Police in Rotterdam, however, stopped a small boat that was planning to sail alongside the drillship. After dark, the protestors used projectors to displays messages on the hull of the vessel to also highlight their cause.

The action by Ocean Rebellion followed a similar demonstration by Greenpeace in December at the same vessel. In typical fashion of their protests, activists scaled the side of the vessel and hung banners saying No Deep Sea Mining.

Greenpeace has called on its supporters and activists to join it in a large protest Friday morning in Brest coordinated to the last day of the One Ocean Summit. 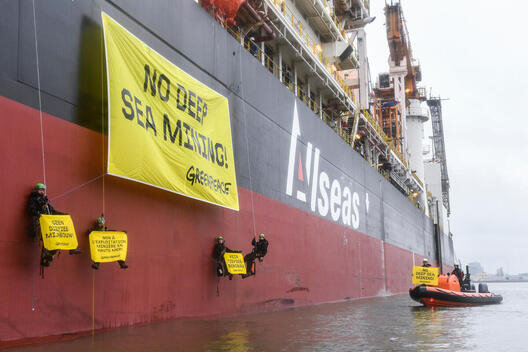 In December, Greenpeace scaled the ship and hung banners from the Hidden Gem in Rotterdam (Marten van Dijl photo courtesy of Greenpeace)