Delegates to the first day of the IMO’s Marine Environment Protection Committee arrived this morning at the UN agency’s London headquarters to be met by protestors as the week-long sessions began. MEPC 79 looks to address the pressing issues on the environment with several environmental organizations reporting hopeful signs ahead of the session which is set to lay the groundwork for more action in 2023.

The environmental group Ocean Rebellion, which has been known for its flamboyant demonstrations in the past in front of IMO, returned this year to stage more attention-getting demonstrations. The group Tweeted out a message saying “And here we are again, Marine Environment Protection Committee meeting, at UN IMO HQ in London. OMG IMO sort your ship out ACT NOW to halve shipping emissions before 2030, advise against any fossil fuel subsidies, and start severely taxing shipping fuel.”

When the delegates arrived, Ocean Rebellion’s activists greeted them with flames and a black carbon fog of Heavy Fuel Oil (HFO). They added an oil slick while two other suited figures died clutching briefcases and characters dressed as seafarers in life jackets unfurled banners reading “Get ships off fossil fuels,” and another saying “No liquid gas,” making an expanded assault on the industry’s increased use of LNG. At the end, clean-up ladies dubbed the “Dirty Scrubbers” came to clean up the mess by “greenwashing it away.”

The group said their demonstration was full of symbolism to highlight the IMO’s refusal to tackle shipping pollution ahead of 2030 which is “destroying the ocean and chances of keeping anywhere near the 1.5 C demanded by the Paris Climate Agreement.” The group asserts that the IMO fails to take even simple actions like slow steaming, using cleaner distillates instead of HFO, and less unnecessary shipping.

“By avoiding simple solutions like slow sailing, wind, and less international commerce the IMO is condemning the Paris Climate Agreement to a slow death – death by a thousand meetings,” said Chris Armstrong, a professor of Political Theory at the University of Southampton, in support of Ocean Rebellion. “We must Act Now to reduce shipping emissions. Commitment to Net Zero by 2050 cannot be used as a corporate ruse to avoid taking urgent action. Shipping needs a plan to rapidly decarbonize, starting now.” 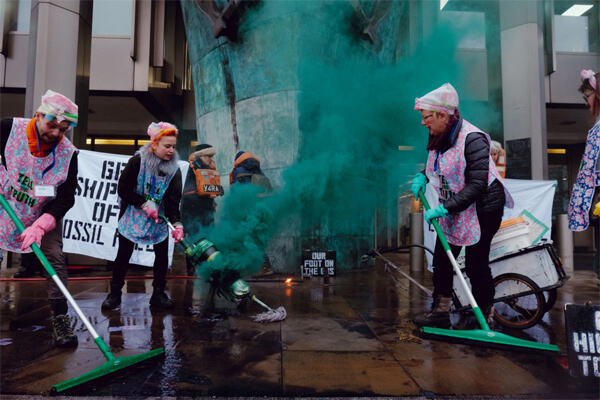 The group is calling for the delegates to stop counting on voluntary actions by the industry to address the challenges of climate change asking when has voluntary switching ever worked in any industry. “The IMO must act to end HFO use now – not just in the Arctic but everywhere – if it is illegal to burn a fuel type on land then it should be illegal to burn at sea.” The group also singled out LNG highlighting that shipping and port companies have been investing heavily in fossil LNG.

Among their demands are that the IMO must stop backing the fossil fuel industry by not taxing shipping fuel and allowing fossil fuel byproducts to be burned at sea. They also called for regulation of petrochemical shipping while saying the UN “must now form a new, transparent, and representative body to govern the ocean.”

A coalition of environmental groups, however on Friday issued a more positive statement saying that they believed the IMO and MEPC were inching “towards a 2030 emission reduction goal,” and at the end of last week’s preliminary technical talks “the UN’s maritime regulator showed countries are prepared to phase out shipping emissions by 2050.”

The groups, which included Ocean Conservancy, Seas at Risk, Clean Arctic Alliance, and Carbon Market Watch, said they welcomed the statement of the IMO Secretary-General that consensus is building towards a substantial carbon price to raise the tens of billions per year needed to upgrade the sector to zero carbon propulsion. They also called on the IMO to use the growing momentum to make progress on the key initiatives. They noted that this week delegates are also negotiating on a “basket of different measures” to reduce emissions from ships in the medium term, including a carbon levy and a fuel standard.