The Environmental Justice Foundation (EJF) has claimed that dolphins are being harpooned and butchered for use as bait to catch sharks, thousands of sharks have been stripped of their fins and thrown back into the sea to drown and turtles have been killed and discarded during Taiwanese fishing activities.

In a new investigation, EJF spoke to Indonesian crew members from five longline vessels fishing in waters around the world, from the Pacific to the Atlantic and Indian Oceans – all either flying a Taiwanese flag or linked to Taiwanese ownership. Taiwan's distant-water longline fleet is a key supplier to the international tuna market, in particular high-value sashimi-grade fish. This is exported to major economies including Japan, the U.S. and the European Union.

On all five boats the crew reported being ordered to remove shark fins and throw the bodies overboard – a practice that is banned by Taiwan. The fins are destined for the lucrative market for shark fin soup. The sharks – unable to swim without their fins – suffocate or bleed to death.

Some of the vessels also illegally caught and killed dolphins, which are protected under Taiwanese law. Crew aboard one vessel were ordered to harpoon dolphins riding the bow wave: once harpooned, the animals were dragged alongside until they were exhausted or dead; those still showing signs of life were crudely electrocuted using a car battery. The dolphins were then butchered and the meat used as shark bait. Around 300 dolphins were killed in this way on each of the vessel’s three-month trips, according to the crew.

“It is easy to catch [dolphins]. We could kill maybe six to nine per day. But if we had 10 dolphins already on deck and there were still more at the bow, we would hunt them until they were all caught,” one crew member told EJF.

Crew members also reported catching hundreds of sharks every day: these included the illegal capture of juveniles, which would be used for bait, alongside landing vulnerable species such as smooth hammerhead and bigeye thresher sharks.

Inspections by the Taiwanese Fisheries Agency were ineffective and easily evaded, claim the crew. Once in port, crew simply put the shark fins at the bottom of the freezers under a layer of fish so they were hidden from view, to be sold in the early hours of the morning.

“We would unload in the middle of the night at 3 a.m., pull the fins out and sell them. Captain would often order us to hurry when we were unloading the fins,” said a crew member.

Aboard another vessel, which was under Taiwanese ownership but flying a Panamanian flag, the crew reported illegally killing turtles and dolphins. On one occasion a false killer whale was caught – an oceanic dolphin listed as ‘near threatened’ by the International Union for Conservation of Nature. Rather than releasing it, as required under Panamanian law, the Taiwanese foreman ordered it to be brought on board and decapitated, so its teeth could be used to make necklaces. 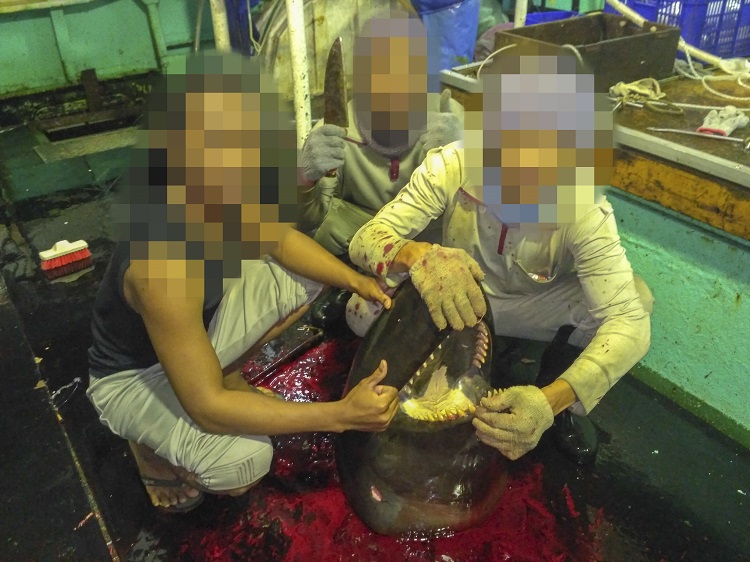 EJF’s Executive Director Steve Trent, commented: “Killing dolphins to catch sharks, this is madness: rogue Taiwanese fishing vessels are ripping the heart out of our oceans. These illegal, unsustainable and brutally cruel activities are being enabled by the Taiwanese authorities’ failure to act. Only three months ago EJF was reporting gross human rights violations aboard Taiwanese vessels, now we have exposed the shocking illegal exploitation of wildlife by the same fleet. Enough is enough. Taiwan can be a global leader on fisheries governance: it has the finance, technology and opportunity to end these abuses and create legal, sustainable and ethical fisheries.

“Taiwan must also create a simple and effective action plan to protect sharks. The handful of vessels we investigated caught tens of thousands of sharks – illegally discarding the bodies to make space for more. Multiply that by Taiwan’s large fishing fleet and the scale of exploitation of the marine ecosystem is vast. Action needs to be taken to stop the slaughter,” Trent added.

EJF is calling for Taiwan to sign up to the 10 principles for fisheries transparency and for immediate action to be taken to investigate and prosecute vessels and companies alleged to be involved in illegal fishing and human rights abuses.