Dutch startup Eco Clipper, which looks to develop global sail cargo operations, has announced the sailing schedule for its first vessel, a smaller two-masted sailing ship acquired in January 2022. The 110-year-old ship is seen as a proof of concept and an opportunity to draw attention to the company’s efforts to build modern adaptations of traditional sailing ships that would carry up to 500 tons of cargo.

De Tukker is the first in a fleet of low-impact sailing ships which will transport cargo and passengers using the wind as a main source of propulsion. The schedule focuses on the North Sea, the English Channel, and the Bay of Biscay. The company plans to launch operations from the Netherlands on August 15, operating between the UK, Portugal, and France, with a stop late in 2022 in Antwerp before ending the year back in the Netherlands.

Because De Tukker measures 131 feet with a shallow draft of less than 8 feet, the company highlights that it will be able to reach smaller ports which it hopes will increase its public profile as works to establish the concept. Eco Clipper says the barge-shaped hull will be able to carry about 60 cubic meters, or an equivalent of 50-70 tonnes, of cargo. There will be space for 12 paying guests, who are invited to get involved in the sailing of the ship but are also welcome to enjoy the experience. 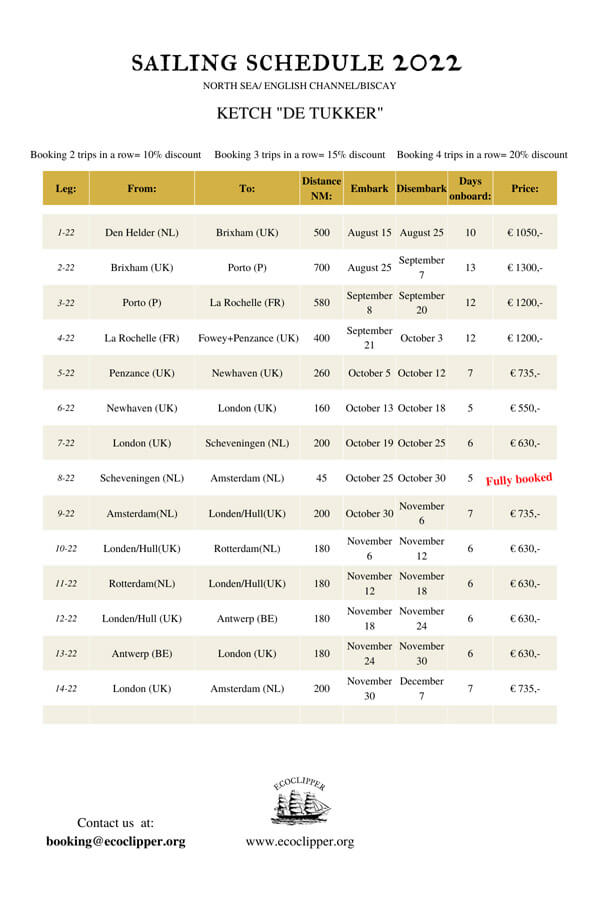 “The 2022 sailing schedule provides a good mix of both larger ports and small harbors. This will increase the visibility of the sail cargo and sail travel industries,” said Jorne Langelaan, CEO and founder of EcoClipper. “It’s fantastic to be able to work in tandem with other sail cargo companies too, we all have a lot to offer and we are all moving towards the same target: to ultimately reduce shipping emissions and provide the tried and tested method of sailing as a viable transport option.”

Built in 1912 as Harle Tiefand, the recently acquired vessel worked for many years as a coastal trader. In the 1980s, she became a Dutch sail training vessel and remained active till a grounding damaged the vessel. In December 2019, the charitable organization that had operated her as a training ship sold the vessel to a German company, Spirit of the Oceans, that planned to convert her into a houseboat. Eco Clipper acquired the vessel in January 2022.

The ship is currently undergoing refit work at Talsma Shipyard in the Netherlands. The retrofit of the ship will include returning the day cabin and galley to their former use as a cargo hold. Accommodations are being prepared for the paying passengers and a small deckhouse with a mess room will be positioned on the deck, in front of the mizzen mast.

The draft of De Tukker has also been increased by an extended keel which the company says will provide more stable sailing. Research is also being carried out into installing a propeller generator and solar panels on the galley deckhouse, which would cover the onboard lighting system and navigation, thereby further reducing fossil-fuel use.

The refit crew reports they are making good progress on the traditional vessel with the masts and spars having recently been sanded and varnished. The carpenter is finishing off the repairs and a rigging crew has arrived, so all the shrouds, wires, stays, blocks, and lines are being serviced and repaired where necessary.

EcoClipper was founded in 2018 by Captain Jorne Langelaan and has been working on developing its designs for sailing cargo ships. They also hope to use the first vessel to help with attracting investments to pursue the global fleet.