Swedish and Danish authorities launched a search and rescue mission overnight after two general cargo ships collided and one capsized in the Baltic south of Sweden. One crew member from a Danish vessel was killed and another was missing while Swedish authorities said they were investigating charges of gross negligence and drunkenness among the crew on the British vessel.

The Swedish Coast Guard, Maritime Administration, and Sea Rescue Society coordinated in their efforts sending nine vessels into the area and a helicopter after receiving reports of the collision at approximately 3:30 a.m. local time. The collision took place in a busy sea lane south of the Swedish town of Ystad and the Danish Island of Bornholm. At the time, there were reports of patchy fog but calm sea conditions.

The larger of the two vessels was the British-registered vessel, the Scot Carrier, a 3,450 gross ton general cargo carrier. Built in 2018, the vessel is 295 feet long with a speed of 11 knots. The vessel had departed Sweden’s Gotland island and was returning to Scotland.

The smaller Danish vessel was a 180-foot self-sailing barge Karin Høj . Built in 1977, the barge had a crew of two aboard and reportedly was capable of top speeds of 6 to 7 knots. It was sailing from a port near Stockholm to southern Denmark.

The Karin Høj capsized during the collision but remained afloat. Immediately after the accident, the crew on the Scot Carrier reported hearing screams for help in the water and launched their lifeboat but reported that they were unable to locate anyone. Experts reported the sea temperature was approximately 40 degrees (4 degrees Celsius) meaning without a survival suit the danger of hypothermia was very high.

The Swedish Maritime Authority decided to suspend the search by mid-morning while the Swedish Coast Guard and Sea Rescue Society were successful in attaching a tow line to the overturned vessel. They decided to reposition the vessel closer to shore so that divers could complete a search while also preventing it from sinking and a potential release of oil in the water.

Late today the Swedish authorities reported they had recovered the body of one of the Danish sailors from the vessel while the other remains listed as missing.

“The Coast Guard is currently taking a number of investigative measures,” said Jonatan Tholin who was leading the investigation. “Additional criminal suspicions have arisen, including gross sea drunkenness.”

Sweden has some of the strictest intoxication rules in Europe. The BBC is reporting that the legal limit in Sweden is just 0.02 percent blood alcohol versus the higher 0.05 percent in the UK.

Scotline Marine Holdings issued a statement confirming that its vessel had been involved in the collision and saying that the Scot Carrier is "now alongside in the Port of Ystad, Sweden and the crew and company will co-operate fully with the investigation into this tragic incident." The company credited the second officer and master for contacting the Swedish Coast Guard and launching a rescue boat to search for crew members of the Karin Høj.

"In line with standard procedures, it is understood that all crew members of the Scot Carrier were tested for drugs and alcohol with two crew members exceeding the legal limit," the company said in its written statement. "Scot Marine Holdings confirm that they have a strict drug and alcohol policy in place and have a zero-tolerance for any breaches that occur."

The Swedish Prosecution Authority reported that it was detaining a British citizen born in 1991 and a Croatian citizen born in 1965 as part of its preliminary investigation for “gross sea drunkenness, gross negligence in maritime traffic, and gross causing of another's death” due to the collision in the strait between Sweden and Bornholm. 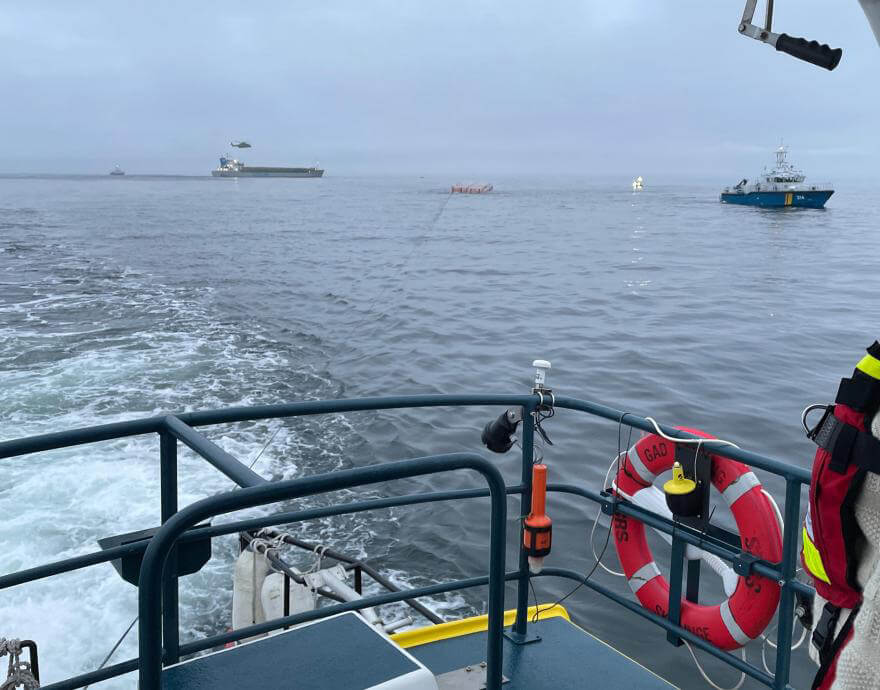