For the second time in as many months, DNV is highlighting the record pace of orders for LNG-fueled ships. According to the latest figures from DNV’s Alternative Fuels Insight platform, LNG orders continued at pace in May 2022, well ahead of the rate seen just a year ago.

“In May, 30 orders were placed meaning Q2 2022 is already the strongest quarter on record, despite only being two months into the quarter,” reports DNV.  During the month they calculated that 30 more orders for LNG-fueled ships were added. The growth came almost exclusively from containerships and car carriers, reports DNV Maritime’s principal consultant, Martin Christian Wold.

While May represented the fourth strong month for new orders, it was slightly behind April’s record setting pace. Last month, DNV said that the 51 orders placed during April would add around half a million tons of LNG demand.

Discussing the trend in the market, Wold commented in April, “Should this trend continue at the same pace, we could reach the 1,000 vessels mark by the end of the year. However, although we expect growth to continue, it is likely to be more modest for the rest of the year.” 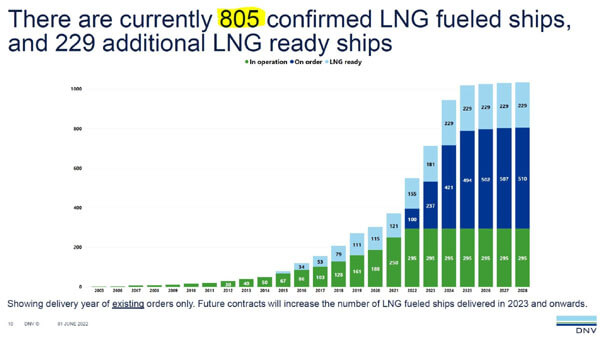 Driving the growth is the increasing adoption of LNG for large, deep-sea vessels. DNV calculates that a total of 151 orders have been placed since the beginning of this year which is nearly a fifth of the total LNG orderbook. As of the end of May 2022, LNG orders reached 805 vessels. Containerships lead the orderbook with 175 vessels followed by car carriers at 95 vessels, 88 tankers (crude and product combined), and 44 bulk carriers. Those segments of the industry total half the orders for LNG ships, with the other orders dispersed through all the major categories of shipping.

Despite the rapid growth in the orderbook for LNG-fueled vessels, Wold highlights one potential issue. “Although current LNG bunkering activities remain very low, there is some hope on the horizon that activity in the LNG bunker market could return as oil prices continue to stay high.”

The industry has been moving rapidly however to build the infrastructure required to support the growth in the LNG fleet. DNV calculates that there are now 38 LNG bunker vessels in operation worldwide. The bunker segments will nearly double with an additional 18 ships on order and DNV reports that a further 17 are currently under discussion.