DNV: Momentum Builds for LNG-Fueled Vessels with More than 500 Orders

The shipping industry is continuing its adoption of LNG-fueled propulsion as the current leader within the alternative fuel sector for new builds. According to the latest update from DNV in its Alternative Fuel Insight report, nine additional LNG-fueled vessels were ordered in July pushing the total orderbook above 500 vessels by 2028, which is approaching nearly two times the fleet of in-service LNG-fueled vessels.

DNV reports that there are currently 313 in-service vessels operating on LNG, mostly with dual-fuel engines. The number has grown rapidly over the last eight years compared for example to 2014 when there were just 50 LNG-fueled vessels in service. The segment currently with the greater number of LNG vessels in-service is passenger ships and car ferries although the numbers are quickly rising for containerships, tankers, and offshore supply vessels.

In addition, there are a further 229 vessels currently in service that are considered to be LNG-ready. Large operators have been slow to undertake conversions, in part waiting for the cost required for the conversion to decline to improve the economics of refitting the ships. Hapag-Lloyd completed in 2021 the first conversion of a containership that had been built LNG-ready and recently MAN confirmed that it has been contracted by Matson to undertake the refit of the first of line’s LNG-ready containerships. 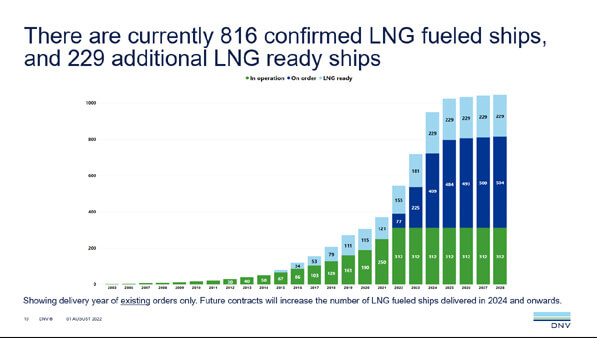 “Although the growth in orders has slowed down somewhat in line with the general newbuild ordering activity, there are several large orders in the pipeline,” said Martin Wold, DNV’s Principal Consultant for Alternative Fuels. Responding to comments on social media, Wold points out that there will be “lots of additional orders for LNG-fueled ships for 2025 delivery and beyond.”

An analysis of DNV’s data shows that orders for LNG-fueled vessels surpassed 160 in the first seven months of 2022. Containerships are leading the orders representing half of the vessels being ordered followed by car carriers which make up another quarter of the orders. The shipping industry is embracing dual-fuel technology with 89 percent of the orders using these engines versus pure gas engines.

Commenting on DNV’s update, Tahir Faruqui, General Manager - Global Head of Downstream LNG at Shell LNG Marketing and Training points out, “It shows the magnitude and momentum being built in the maritime world.” He sees it as a demonstration of the industry’s commitment to decarbonizing the sector.

Wold also highlights in the latest update that the infrastructure is being developed for fueling LNG vessels. DNV’s data shows that the number of LNG bunker vessels reached 38 in-service this year. They also report that 18 additional bunker vessels are on order. They also believe that 18 additional LNG bunker vessels are under discussion. This is supporting the geographic expansion for the operation of LNG-fueled vessels. While Europe remains the largest area for LNG ships, DNV shows that global operations are the largest segment for the new orders.

He highlights the recent efforts by companies including MSC Mediterranean Shipping, Pacific International Line, and Futuretank for adding to their already sizeable fleet and orderbook for LNG vessels. Other alternative fuel projects he also notes are advancing with orders for methanol-fueled vessels.

“Demand for low and zero carbon fuels is slowly building on several fronts,” says Wold. He also highlighted MSC’s order for new cruise ships that will run on LNG and feature liquid hydrogen-powered fuel cells. “This type of pilot project is absolutely key to drive technology maturity and the safety framework,” concludes Wold.