In the efforts to develop a practical solution for the shipping of hydrogen, an Australian start-up reports it achieved the next milestone in its efforts for a compressed hydrogen carrier able to transport hydrogen at ambient temperatures for up to 2,000 nautical miles. The American Bureau of Shipping (ABS) reviewed, verified, and approved design work carried out by Provaris for its concept for a 26,000 cbm H2Neo compressed H2 carrier. The company reports it will continue the development effort planning to select a shipyard in 2023 as it moves forward with its goal of launching the first carrier by 2026.

Provaris, formerly known as Global Energy Ventures, received an AiP for its design concepts for both the smaller 26,000 cbm H2 Neo carrier and the larger H2 Max carrier which would have a capacity of 120,000 cbm, in 2021. The company reports it spent 12 months completing extensive FEED (front end engineering design) for the H2 Neo carrier.

Unlike others that are looking at converting hydrogen either to a liquid or a carrier such as ammonia, Provaris believes its concept can offer a safe and economic solution that can become a first mover and an alternative for regional hydrogen trades. The company describes the H2Neo design as characterized by two large-diameter cylindrical tanks, one in each of the port and starboard cargo holds with a maximum allowable operating pressure of 250 bar. To avoid boil-off/cargo losses and to avoid the need for insulation and energy-intensive cooling during the voyage, the hydrogen is carried at ambient conditions. They are developing a design to integrate a relatively thick steel layered tank (as required for 250 bar) into the hull of a relatively conventional-sized hull with low operating drafts. 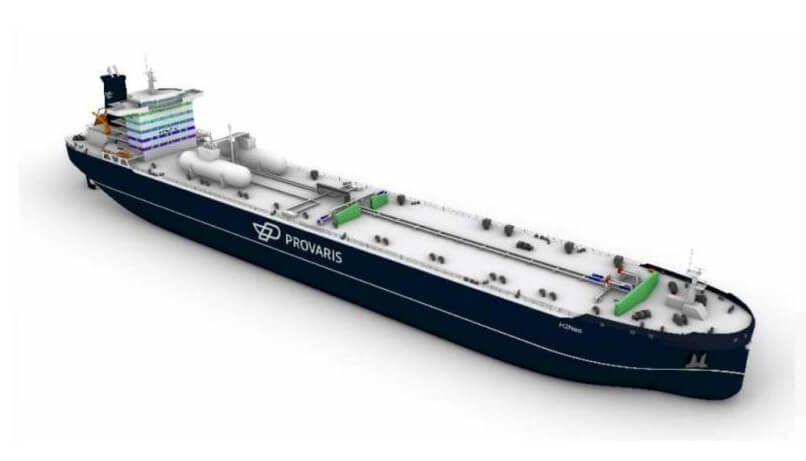 According to Provaris, the tanks are designed so that they cannot suddenly rupture and release a catastrophic amount of energy. This is achieved by a cargo tank construction that is composed of layers of steel, nested together, including a stainless-steel inner layer to protect the high-strength carbon steel from hydrogen embrittlement. The loading of compressed hydrogen directly into the GH2 carriers can be accomplished through existing, proven technology (compressors) eliminating the need for onshore hydrogen storage and/or facilities to convert the hydrogen into alternative forms at the loading port such as ammonia or liquefied H2.

In the next stage of the development of the vessels, Provaris says it will move to construct and test a prototype hydrogen tank and prepare for the construction of the first ship by selecting during 2023 a preferred shipyard for the final design and testing. To help guide the process of selecting a shipyard, Provaris has appointed Clarksons’ newbuild team in London to assist with the shipyard selection and tender process.

Provaris is also working on the FEED design stage for its larger carrier the H2 Max. The larger vessel would also have a broader shipping range of up to 3,000 nautical miles. Their schedule calls for completing the FEED design project in 2023 with a target of the first shipyard contract by 2026. The Max carrier is targeting to begin operations in 2030.