A coalition from the shipping industry unveiled its standard design for a Methanol-powered product tanker able to operate in a broad range of situations. The vessel, which is designed to carry a range of cargoes and bunker Methanol independently, also received classification society approval.

Hyundai Mipo Dockyard, MAN Energy Solutions, and the Methanol Institute said that they worked together to develop a design that meets all prevailing safety requirements with minimal loss of cargo capacity and low additional build costs. DNV GL reviewed the designs for the vessels under the relevant rules and regulations and provided technical advice and recommendations for the design development. The design for a Low Emission Advanced Products Tanker (LEAP) was granted an Approval in Principle by DNV GL.

“Governments, NGOs, policy-makers, academics, and technical experts all agree that conventional Methanol provides a safe, clean and practical pathway to short-term emissions reductions,” says Chris Chatterton, Chief Operating Officer, The Methanol Institute. “This vessel design demonstrates that newbuild or conversion can be straightforward and cost-effective and extends the trading life of the asset as it can use renewable Methanol as more becomes available.”

According to the companies, the building costs of the design would be approximately 10 percent higher than a standard vessel, but less than the 22 percent higher costs for an LNG-dual fuel vessel.

The main advantages are in the ability to reduce harmful emissions. Using Methanol as the fuel, the project estimates the vessel would have daily CO2 emissions of 54.7 tons per day at service speed, compared to 64.7 tpd for diesel. The ship would have an approximate six percent improvement in its EEDI Phase 3 rating compared to a diesel-only vessel.

“Methanol ticks the boxes from an emissions point of view, with no sulfur, very low PM and carbon dioxide emissions around 15% lower than conventional marine fuel oil,” says Kjeld Aabo, Head of Marine and Offshore Sales, 2 and 4 stroke engines, MAN Energy Solutions. “To meet IMO NOx Tier III requirements, Methanol can be blended with water which brings the ship into compliance without the need for expensive exhaust gas after treatment.” 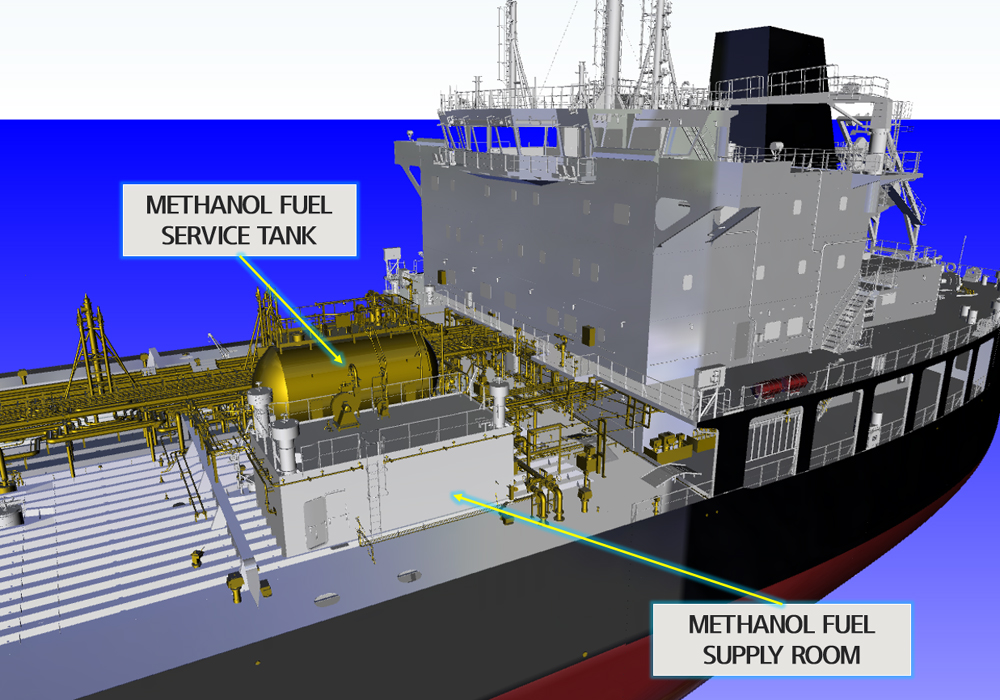 The design uses two slop tanks of 2,600 cubic meters to store Methanol as fuel, positioned aft of the cargo tanks, protected by a cofferdam, with the fuel supply system connecting to the engine room via an on-deck service tank. Methanol is bunkered by an independent manifold and the design includes tanks for VLSFO and MDO storage to provide complete operational flexibility.

“HMD is pleased to have provided initial and detailed design for the LEAP vessel design using the experience accumulated from successful dual-fuel methanol carriers for numerous international owners,” said YH Chung, Head of Initial Design Department, Hyundai Mipo Dockyard. “This design results in an estimated cargo loss of 0.5 percent for a low construction premium, providing shipowners with the ability to build a low emissions vessel today.”