Debris Removal from X-Press Pearl Begins as Salvage is Contracted

The first phase of the salvage efforts has begun at the wreck site of the containership X-Press Pearl that sunk off Colombo, Sri, Lanka in June 2021. This comes as the vessel’s owners reported that they have also contracted for the removal of the hulk that remains partially exposed while sitting in the bottom outside the harbor and compensation discussions are ongoing.

Removal of the debris and the wreck was delayed during the monsoon season, but has now commenced with the government anxious for the cleanup to proceed. During the summer additional side scan sonar surveys were undertaken in the area around the wreck to identify the containers and other debris lost from the vessel during the firefight and subsequent effort to tow it to deep water.

Resolve Marine, which was appointed as caretakers of the sight, started the first phase which is removal of debris from the ocean floor and around the wreck. The efforts began in November, and images show large bins full of brunt and twisted metal debris being loaded onto the offshore vessel for disposal.

X-Press Feeders contracted Shanghai Salvage Company for the removal of the wreck. They reported that a salvage team has already begin to mobilize but did not release a timeline for the operations to begin. During the operation, they plan to maintain a 24-hour watch for debris or pollution and will take regular water sampling. 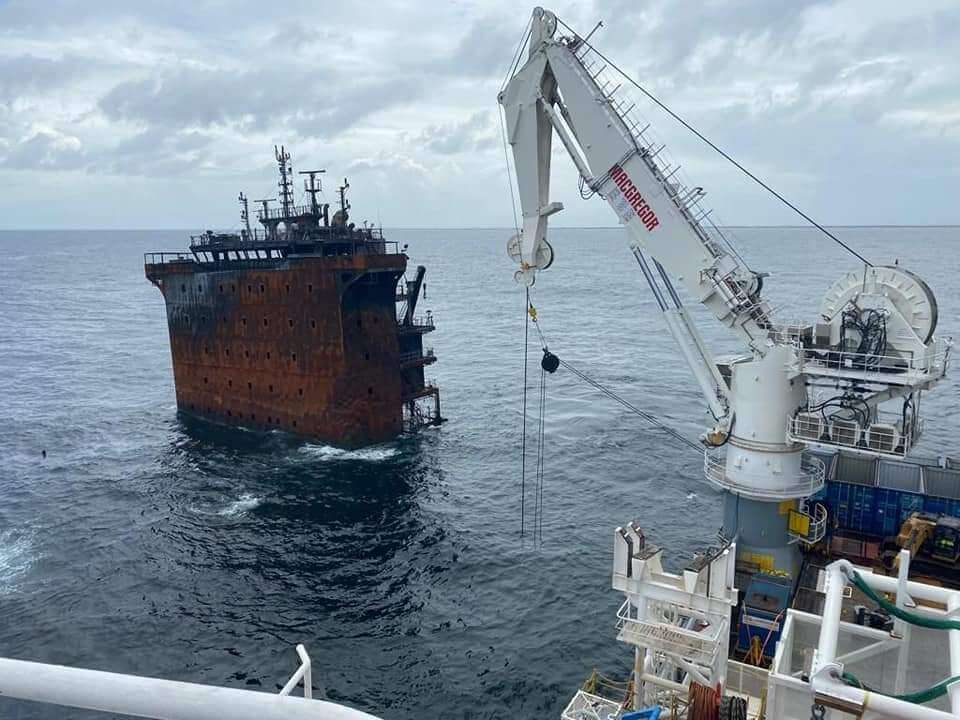 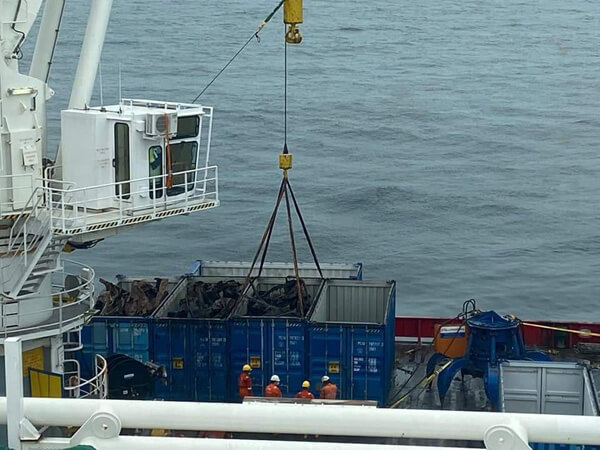 Environmentalists however remain concerned over the longer-term impact of what has been described as the largest plastics pollution incident. A study conducted on the site and the waters concluded that an estimated 70 to 75 billion nurdles (small plastic pellets) were released into the ocean. Many fish have died after eating the nurdles while the scientists expect long-term impacts from the pollution. The study, published in the Environmental Journal of the American Chemical Society, said that two types of pollution remain, the nurdles as well as burnt plastic which has changed in look and characteristics. The material remains widely spread on the ocean floor and in the ecosystems. In November, Sri Lanka’s Minister of Justice Ali Sabry told Parliament that 1,650 tons of plastic debris had washed ashore and been collected on Sri Lanka’s beaches. Debris reached from Colombo to Negombo approximately 20 miles to the north.

The Government has taken steps to compensate the fishing community which lost their livelihood in the disaster. They are working to develop new fishing ports in the eastern part of the country and in the meantime provided cash compensation to the fishing industry. The government also assured the fishermen that it would take steps to prevent trawlers from India entering the new fishing areas in the country’s territorial waters.

The ship’s owners are still working with the Sri Lankan authorities to repatriate eight crew members that remain in Colombo. The company said it was eager to get them home.

In June 2021, the government made an initial claim of $40 million while saying it was still accessing the long-term damage. They also retained an international law firm. X-Press Feeders and its insurers made an initial payment of $3.6 million to the Sri Lanka government to be used to compensate those affected by the fire and sinking, while saying, “Discussions are ongoing on the payment of further claims and all legitimate claims will be considered.”

Sri Lanka recently made a second claim against the owners for an undisclosed amount. X-Press Feeders said it is being reviewed and discussions are ongoing while the justice minister told Parliament that the country was prepared to take the company and its insurers to international court if they refused to pay the full compensation.