The Australian Transport Safety Bureau (ATSB) has released its findings into the man overboard fatality from bulk carrier Cape Splendor in Western Australia on October 6, 2014, citing disregard for

The vessel was moored at the time of the accident. Cape Splendor’s bosun descended to the lower platform of the ship’s accommodation ladder during his lunch break. He intended to fish from this location and asked a seaman to assist. At 1250, the bosun lost his balance and fell into the sea. 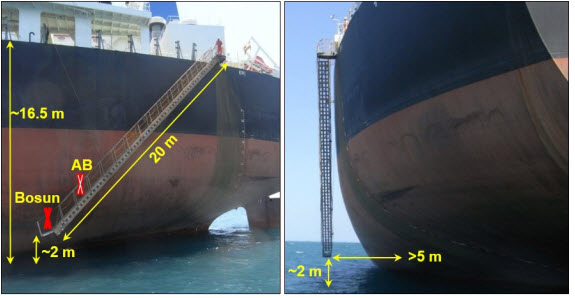 The seaman immediately returned to the ship’s deck and threw a lifebuoy toward the bosun, before raising the alarm. The ship’s crew deployed its rescue boat within 10 minutes, and an extensive air and sea search continued for three days. However, the bosun was not found.

The ATSB found that the bosun and the seaman were not wearing any flotation devices or fall prevention equipment. The bosun had seen fish below the accommodation ladder that was in the shade, and he probably saw it as a good opportunity to fish without considering the risks involved.

The lack of a lifejacket, wet clothing, the possible entanglement with fishing gear, sea conditions, and the current would have adversely affected the bosun’s ability to stay afloat and swim.

The ATSB investigation identified that the ship’s safety management system procedures for working over the ship’s side were not effectively implemented. Hence, the ship’s crew routinely did not take all the required safety precautions when working over the side. It was also found that the crew had differing attitudes to taking safety precautions during work and recreation times as the safety culture on board was not well developed.

When ATSB investigators attended Cape Splendor after the accident, they observed the crew rigging the ship’s port side, midships accommodation ladder. The observed an absence of standard working at height precautions, such as fall prevention equipment, unraised handrails on a ladder section 13m above water with two crew members on it and crew member standing outside ship’s handrails with no fall protection or lifejacket.

Cape Splendor’s managers U-Ming Marine conducted a fleet-wide review of procedures and training to ensure ship crews comply with procedures and permits to work. A number of fleet-wide memoranda describing the accident were issued to promulgate lessons learned, encourage compliance with policies and procedures and reiterate the importance of taking safety precautions during both work and during leisure periods.

The ship’s managers have prohibited fishing from ships’ accommodation ladders and warning signs have been posted. Man overboard recovery procedures were reviewed and the accident was highlighted in training programs.

The ATSB has issued a safety advisory notice to shipmasters, owners and operators to promote the importance of an effective safety culture on board ships.