The Unified Command managing the salvage operation for the capsized ro-ro Golden Ray is reporting a delay for the final stages of the operation while they address engineering challenges that were uncovered as the prepared to position the heavy life crane at the wreck site. The cutting and lifting operation, which had been due to commence in October, is expected to be delayed by several weeks.

The salvage plan calls for the twin-hull heavy lift vessel VB-10,000 to be positioned at the wreck site and the two 255-foot tall gantries on the vessel will use lengths of chain to cut the capsized vessel, the Golden Ray, into eight pieces. The sections will then be lifted onto barges for eventual transportation to Louisiana for recycling.

Engineers with the response designed an array of five anchors for the VB-10,000 that accounted for multiple challenges, including the extreme currents in the sound, restrictions to movement due to the Environmental Protection Barrier (EPB), and the proximity to the shipping channel. After successfully installing and pull-testing four anchors, the fifth anchor which is said to be at the most challenging mooring site in the system did not meet its pull-test requirements.

The Unified Command (UC) is now reviewing multiple options for a revised anchor system. The considerations include ensuring the safety of responders and the public, safeguards for the surrounding environment, and providing for the continuation of commerce in the port. 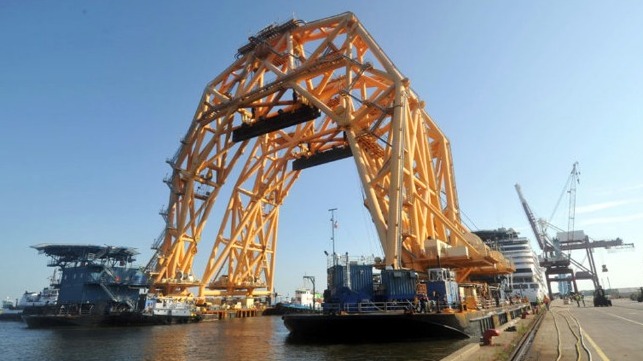 The VB-10,000 hen it arrived in Florida in July 2020 to prepare for the operation - Photo by U.S. Coast Guard Chief Petty Officer John D. Miller

This is the latest delay for the salvage operation. In July, the Unified Command decided to reschedule the cutting and lifting operation until the fall due to the steps required to manage the COVID-19 risk and the danger of hurricanes disrupting work at the salvage site. In early August, they had to prepare the site for Hurricane Isaias that was expected to track along the Atlantic Coast.

After a series of tests and practice exercises during the summer, the Unified Command began to ramp up operations in late September. They reported that the first wave of what would be approximately 100 critical response personnel was on-site and being sequestered at a shoreside lodging facility under strict health safety protocols that would continue throughout cutting and lifting operations.

Previously, the Unified Command reported that the cutting and lifting operations were anticipated to last for eight weeks from the onset barring any unforeseen obstacles. The Golden Ray wreck remains stable and is monitored continuously.