Cruising: An Industry “Kept on its Toes”

Speaking at the State of Industry panel at Seatrade Cruise Global this week, the industry's executives focused on the opportunities and challenges that growth is presenting.

The executives all expressed their satisfaction in the industry’s current performance. Richard Fain, Chairman and Chief Executive Officer of Royal Caribbean Cruises, summarized the overall sentiment calling it “a very good time period,” while Frank Del Rio, Chief Executive Officer and President of Norwegian Cruise Line Holdings highlighted the record performance noting that all three of Norwegian’s brands each had strong performance, as did the entire industry, in 2018. Del Rio says that he does not see “any kind of slowdown on the horizon,” a view shared by each of the cruise line executives.

Indeed, the industry association, Cruise Lines International Association (CLIA), highlighted that the final passenger counts for 2018 had exceeded expectations. CLIA says that the numbers demonstrate the health of the industry with seven percent growth in 2018 to over 28.5 million people, prompting CLIA to increase its forecast for 2019 to 30 million passengers worldwide.

Despite the positive expectation, Arnold Donald, President and Chief Executive Officer of Carnival Corporation, highlights that the cruise industry none the less remains capacity constrained in comparison to worldwide demand and the limited number of shipyards with the specialized experience needed to build cruise ships, the time necessary to build a cruise ship, and the investment required, means that cruising can only grow at around the seven percent level.

As part of its growth, the cruise industry also continues to welcome new entrants, a development the executives acknowledge both for “keeping the industry on its toes” as well as introducing new concepts. Fain points out that cruising is not “one size fits all.” Del Rio reminded the audience that “over time all ships get bigger,” as they need space for new features. It is also this high level of diversity that they believe has helped to widen the appeal of cruising.

The executives, however, remain very conscious the business remains a small part of the global tourism industry. While worldwide global tourism is growing rapidly – today it accounts for 10.4 percent of the global economy according to the UN World Travel Organization – cruising’s 30 million passengers is only a small part of the 1.4 billion worldwide travelers annually. Carnival’s Donald, in fact, highlights that major destinations such as Las Vegas and Orlando each have more tourists annually than the entire cruise industry.

Therein the executives believe lies the opportunities for cruising to capture a greater share of the worldwide tourist market. Donald points to the industry’s “over indexing with Millennials” along with the strong interest from travelers who have the time and money to enjoy the diversity of cruising. Donald highlights that more and more baby boomers are reaching retirement age which is also a positive trend for cruising and helping to fuel the trend in multi-generational travel.

Social media is one of the key factors contributing to cruising’s increase popular as a vacation form, according to Pierfrancesco Vago, the Executive Chairman of MSC Cruises. “Word of mouth – social media – is contributing and building awareness,” says Vago. Similarly, Royal Caribbean’s Fain believes the growth of these new communications channels is good for the industry pointing out, Millennials research using the Internet and are less prone to preconceived notions about the business. “Interest is higher in cruising in Millennials versus baby boomers,” points out Fain.

Indeed, Fain also echoes the same sentiment that the potential is great in part due to the small penetration into the global tourism market. Fain believes that one of the cruise industry’s greatest strengths is that, “it is constantly thinking about the future, looking for new things and changing to reflect people changing tastes.”

The executives realize, however, that the industry must do a better job addressing wrong perceptions and other issues that challenge the future. “We have more work to do to change perceptions of the cruise industry,” says Donald. They recognize that cruise ships have become a very visible symbol of tourism and therefore easy targets for critics. “It is a sexy industry,” says Vago.  “It is very easy to point the finger and also say it is the problem.”

The executives highlight the industry’s growing emphasis on sustainability and track record in improving ships’ environmental impact and carbon footprint. “50 million people a year pass through the Barcelona Airport,” points out Vago comparing it to the two million cruise passengers that also pass through port. Vago pointed to the cruise lines efforts to work together managing passenger flow by coordinating arrival and departure times in port as an example of how the cruise lines have worked with local communities to reduce the negative perceptions of the business. Christine Duffy, the President of Carnival Cruise Line, speaking as part of a female executives’ panel conceded, “There has been a lot of focus on the government level,” admitting they needed to “do more on the community level, to learn, listen and understand,” to address the concerns. 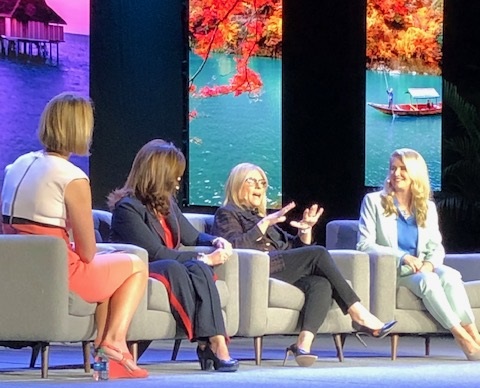 While cruising has made significant progress on many fronts, and is working better with destinations and local communities, the executives also understand that there are other challenges yet to be addressed. Lisa Lutoff-Perlo, President and Chief Executive Officer of Celebrity Cruises, speaking as part of a panel of female executives in the cruise industry, noted that she, “felt a responsibility,” as a female leader but also “a huge opportunity in the shipboard operations,” side of the business. “Balancing gender on board is not that easy,” Lutoff-Perlo concedes despite the strong progress Celebrity and other lines have made. Jan Swartz, President of Princess Cruises agrees, “There is a lot still to do on the deck and engine,” side of the operations.

The cruise industry faces a strong challenge to attract and retain qualified personnel at all levels of its operations. The female executives highlighted that it is important not only to work on diversity but also inclusion to unlock value for the industry. “We want to be an industry that communities welcome,” concluded Lutoff-Perlo.

Sharing their excitement, the executives point to the joy cruising creates and its strong contributions to local communities. Cruising is an industry that can create the experiences vacationers seek. Duffy highlights cruising is “unique because it creates relationships between passengers and the staff. When was the last time you saw someone hugging their waiter at a resort at the end of their vacation?”

The executives remain optimistic pointing to markets such as China, which Swartz predicted, “will be the largest cruise market in the world.” Del Rio also pointed to the industry’s return in the Eastern Mediterranean ports as something that will contribute to attracting more passengers and as a signal better stability in the region.

Everyone agrees that cruising has made significant progress on many of the concerns and is committed to leading on key issues from sustainability to diversity and creating opportunities for a broad range of communities around the world.