Cruise ship passenger Isabelle Lagace, 29, has been sentenced to 7.5 years in an Australian prison for attempting to import $21 million in cocaine in her baggage. In combination with drugs seized from her companions, it was the largest single cocaine bust on a passenger vessel in Australian history.

Lagace, a Canadian national, arrived in Australia on the cruise ship Sea Princess on August 29, 2016, at the end of a world tour. She boarded in Dover and cruised to Ireland, Bermuda, Colombia, Panama, Ecuador, Peru and Chile, posting photos of her journey to her Instagram account along the way. But when she docked at the Overseas Passenger Terminal in Sydney, the Australian Border Force was waiting to search her cabin, and the officers found a black suitcase under her bed containing 29 kilos of un-cut cocaine. 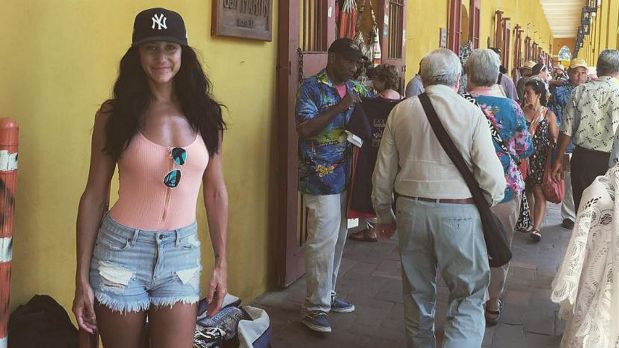 Lagace, along with companions Melina Roberge, 23, and Andre Tamine, 64, were charged with attempting to import a commercial quantity of a controlled substance. Lagace pled guilty, and in an affadavit she said that she had departed on the cruise when a $20,000 loan came due. She had agreed to carry the shipment under duress, she said, and she acknowledged that she knew that her bag would be loaded with an illegal substance. While the judge could not find evidence that Lagace knew the identity or quantity of the drug, it was clear that her cooperation was "central to the importation" of the shipment, and that she had been motivated by money. The maximum sentence for the charge is life in prison, but given that Lagace appeared to be remorseful for her actions and presented "very good prospects of rehabilitation," she was given only 7.5 years, and will likely be released in early 2021.

"It pains me to know my most defining years of womanhood will be spent in jail," Lagace said in an affadafit. "I feel remorse and anger at myself about being involved with people who are part of a dirty, dirty drug trade."

The police believe that the shipment was arranged by an organized crime syndicate, and in announcing the charges they said that a significant amount of effort went into the investigation that led up to the arrests. "This is not the sort of operation where you just turn up to a cruise ship, wander on and happen to come across 95 kilograms of cocaine," said Tim Fitzgerald, a regional commander of the Australian Border Force.

Melina Roberge and Andre Tamine are being held pending trial.