Indonesia crew members working on a small cargo ship stranded onboard for nearly six months have taken to painting messages on the hull of their vessel in hopes of gaining support and the attention of local aid organizations in Taiwan. It is the latest story of crew abandonment by a marginal ship owner leaving crews unpaid in a distant port with no means to get home.

The Chaplin for the international maritime charity Stella Maris stepped in to provide aid to the eight Indonesian crew members after the captain of the vessel asked for assistance. Father Ansensius Guntur told the local reporter for CNA that he received a text message appealing for assistance saying the crew was depressed and going stir crazy while the ship’s owner has failed to respond or pay the crew.

The 242-foot-long general cargo ship they were working on reportedly lost power off the coast of Taiwan on February 23. The Coast Guard provided assistance towing the ship to a dock in Kaohsiung and that’s where their ordeal began. Under Taiwan’s COVID travel restrictions reports indicate that the crew has been forced to remain aboard the ship now for more than five months ignored by the ship’s owner. The unidentified cargo ship is registered in Togo and managed by a shipping firm based in Hong Kong.

Unpaid the crew has taken to painting messages on the hull of their ship. Images supplied by the charity show the words “Let us go home. We crazy here.”

Taiwan’s Maritime and Port Bureau reports that local organizations have been providing basic assistance to the crew. They are dropping off supplies and necessities for basic care.

"What is really worrying is that the crew are getting depressed," Father Guntur told the local news outlet. "The captain wrote to me yesterday and said 'Father, my crew is already going crazy here, what can I do?'" 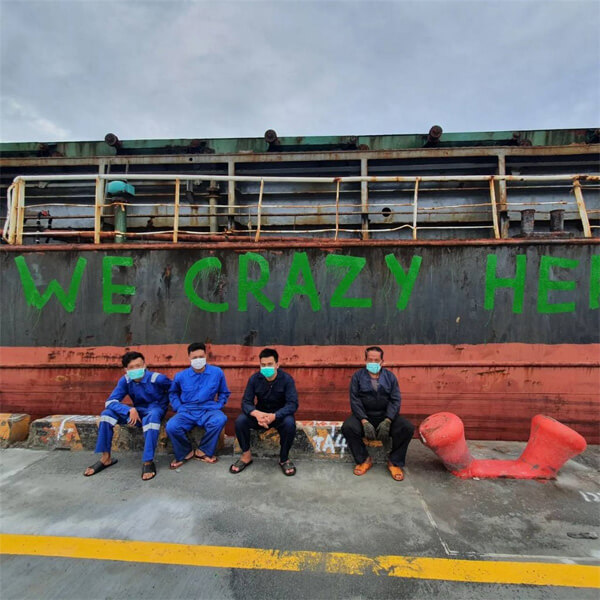 Stella Maris is calling attention to the plight of the crew while also coordinating with the local authorities. The Maritime and Port Bureau reports it has been attempting to contact the ship’s owner but that so far the shipping company has been non-compliant with the request for the crew’s back pay and to make arrangements for the crew to return to Indonesia. The Port Bureau has asked the shipping company to supply a new crew to relieve the ones onboard and provide travel home.

If the situation does not improve, the Maritime and Port Bureau told CNA it will meet in August with the National Immigration Agency, Taiwan International Ports Cooperation, and the Indonesian Representative Office in Taipei to discuss plans to send the crew home. Until then, the crew is left to wait and continue their appeals to local charities.