With pandemic-related travel restrictions continuing to be rolled back in most parts of the world, the cruise industry has recovered in most of its major markets except for Asia where China’s zero-tolerance COVID-19 policy continues to impede the reopening of the market for international cruise ships. Cruise lines have continued to cancel restoration plans for Asia and now comes word in a report from Bloomberg that Carnival Corporation plans a further reorganization for its Costa brand, which was one of the first to develop the Chinese market.

“As a result of continuing uncertainties regarding the full restart of international cruises in East Asia, Costa Cruises has decided to reorganize its structure in the region,” the cruise company said in a statement. Bloomberg highlights that the latest move came just days after President Xi Jinping was re-elected to a third term as China’s leader. Xi has been driving China’s strict zero-tolerance approach which Bloomberg points out is increasingly isolating the country from the west.

Before the pandemic, China had been the cruise industry’s fastest growing segment. Costa, which entered the market in 2006, and Royal Caribbean International were among the first to deploy modern cruise ships to China. By 2019, more than four million passengers were coming from Asia, mostly from China. The country accounted for five percent of the industry’s deployment, although several cruise lines, including Carnival Corporation’s Princess Cruises, Norwegian Cruise Line, and Royal Caribbean International were already retrenching citing slowing growth in China and the lack of a developed marketing infrastructure.

Costa had developed its staff and marketing in China and was building two large new cruise ships for the Chinese market replacing older ships before the onset of the pandemic. The company has now reportedly decided to reorganize its operations focusing on outbound marketing through local representatives in Asia while it indefinitely cancels plans for future homeporting in the region.

It is the latest in a series of steps being taken by Carnival Corporation’s new CEO Josh Weinstein who was elevated to the leadership position in August on the retirement of his predecessor Arnold Donald. Weinstein told investors during an end of September update conference call that the company was pushing for revenue improvements at its brands, including some blocking and tackling tactics at several lines, including Costa.

“In light of the continued closure of cruise operations in China and our Costa brand’s significant presence there pre-COVID, we are reducing Costa’s capacity by 10 percent from 2019 levels, while bolstering our highly successful Carnival Cruise Line brand through the previously announced transfer of three ships, including two via our innovative Costa by Carnival initiative launching in 2023,” Weinstein told analysts. “All three ships (Costa) will be placed on new itineraries, allowing Carnival to expand its drive to cruise offering.” 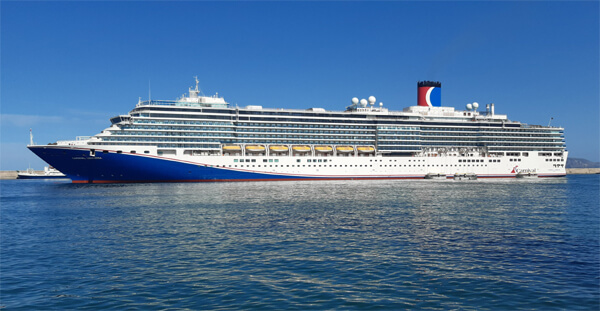 One of Costa’s older cruise ships, the Costa Luminosa (92,700 gross tons) which is a close sister ship in design to existing Carnival ships, was recently transferred to Carnival. The ship was rebranded and will be deployed to fill gaps in Carnival’s Australia and Alaska cruise programs. The newly built 135,500 gross ton sister ships Costa Venezia, which had briefly entered the China market in late 2019 before the shutdown, and the Costa Firenze which was instead introduced in 2021 sailing from Italy, are scheduled to transfer to the new joint venture, Costa by Carnival, in 2023 and 2024 further reducing the Italian brand’s capacity.

Previously, Carnival Corporation had announced plans for one of Costa’s oldest ships, the Costa Magicia, built in 2004 and 102,000 gross tons, to be rebuilt and transferred to Carnival Cruise Line. That was canceled but the ship remains idle. In addition, reports surfaced that Costa has recently canceled the planned 2023-2024 sailing aboard the Costa Fortuna, a sister ship to the Costa Magicia built in 2003, after this cruise ship returns from a program in South America. Costa also announced in September that two of its cruise ships, the Costa Venezia and the Costa Diadema scheduled to operate in the Mediterranean would be laid up for the winter of 2022-2023.

While Carnival Corporation is taking the steps to enhance its near-term performance, the corporation continues to have a long-term commitment to China in the form of a joint venture with the state-owned China State Shipbuilding Corporation (CSSC). The new company acquired two ships from Costa before the pandemic, which were to be redeployed in China but remain laid up, currently anchored off Cyprus. CSSC is proceeding with the construction of China’s first large, domestically-built, modern cruise ship, due to launch for the joint venture company in 2023. CSSC marked the beginning of construction of a second, larger cruise ship in August 2022 also planned to be part of the Chinese joint venture with Carnival Corporation.