With NGOs and humanitarian groups repeatedly saying that the European community is not doing enough to address the migrant crisis coming from Africa, another NGO has decided to press a former supply ship into service to conduct migrant rescues in the Mediterranean. The Italian-based Emergency NGO announced that it has christened its vessel Life Support and dispatched it on its first mission into the central Mediterranean.

The effort comes at a time when the new government in Italy led by Prime Minister Giorgia Meloni has been working to curtail the operations of NGO rescue ships by limiting their access to Italian ports. The groups have accused the European Union, Spain, France, and Malta of having disorganized policies at a time when a concerted effort is required and frequently hindering their activities. Libyan vessels have also repeatedly harassed the NGO vessels.

Documenting the need, the groups cite figures that over 1,300 people have died or disappeared attempting the crossing from Africa so far in 2022, with more than 90 percent of deaths attributed to drownings. They further assert that more than 21,000 people have been intercepted and returned to Libya this year alone.

“Emergency is going to sea to save lives and protect human rights,” said Rossella Miccio, President of Emergency NGO. We believe that Italy and the European Union should run coordinated search and rescue activities, as well as guarantee safe, legal channels for people fleeing war, violence, and poverty. But these do not exist. In their absence, we are joining the civil movement to protect human lives in the Mediterranean.” 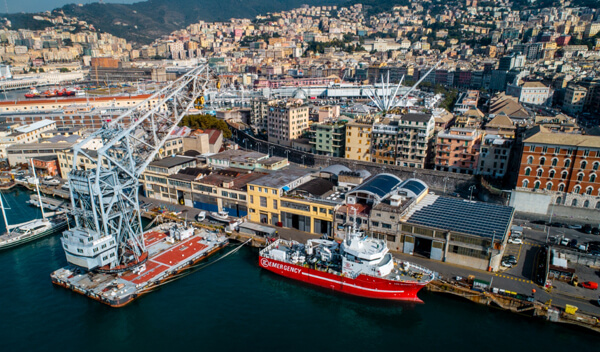 Vessel underwent a conversion at an Italian shipyard (Emergency NGO)

The NGO with support through private donations acquired the 800 dwt Sanco Chaser, a supply vessel built 20 years ago for a Norwegian company Sanco. The company’s idea was to deliver bunkers and provisions to seismic vessels in operation to maximize their time on site without having to return to port for supplies. The vessel is just 168 feet long and 39 feet wide, but the NGO expects it will hold up to 175 rescued migrants in addition to 27 personnel, including 10 crew members, 15 support staff, and two aides.

Renamed Life Support, the ship was converted from an OSV to a migrant rescue vessel at the San Giorgio shipyard in Genoa, Italy, before departing on December 13 for its first mission. Her AIS signal shows she is currently in the central Mediterranean “waiting orders.”

The NGO divided the ship into two working areas, a crew area and one for receiving rescued migrants. They installed new life-saving equipment and adapted the existing equipment. The main deck was re-designed with a medical clinic, toilets, beds, and seating for receiving and processing migrants

The NGO’s team aboard the ship consists of a mission coordinator, a doctor, two nurses, two cultural mediators, two rescuers, a logistician, and a skipper for the rigid inflatable boat. They are joined by the ship’s crew.

The NGO has already taken part in search and rescue operations in the Mediterranean Sea, providing medical care onboard vessels run by other organizations. In 2016, it provided medical aid, cultural mediation, and post-rescue assistance on board Topaz Responder, which belongs to the charity Migrant Offshore Aid Station. From the summer of 2019 to March 2022, it worked with the Spanish charity Proactiva Open Arms on board their ship. The NGO reports it is committed to continuing working with other migrant rescue missions as long as Italy, the European Union and other governments fail to respond to their plight.