In contrast, conventional reefer vessels which have a traditional cargo operation with top opening hatches, have lost ground. Down from some 55 percent in 2000, the share of conventional carriers in the transport of refrigerated perishables has now dropped to just over 18 percent, according to Dynamar's 2018 REEFER Analysis - Market Structure, Conventional, Containers.

Despite a relatively small fleet of 574 ships with a 183.9 million cft capacity, the conventional reefer fleet is rather fragmented. The 15 largest carriers operate 56 percent of the fleet in terms of capacity. The largest of these is Baltic Shipping/Cool Carrier with 11.0 percent. As they operate relatively large units, by number of vessels they are responsible for only 40 percent of the fleet.

Most fruit traders, however, are increasingly dependent on dedicated (full reefer) container ships, and only part of their required transport needs are performed by conventional reefers.

Most container ship operators are, to a degree, involved in the transport of reefer boxes, but only a few have a network of services, the suitable capacity and the equipment to be considered a major reefer operator. Ever fewer carriers qualify as major reefer operators, and whereas a few years ago Dynamar compiled the top 15, it is now difficult to put together a top 10. These top 10 deploy 767 ships in total, with an aggregate 4.33 million TEU and 557,750 reefer plugs, which are deployed in (North-South) relevant trades. 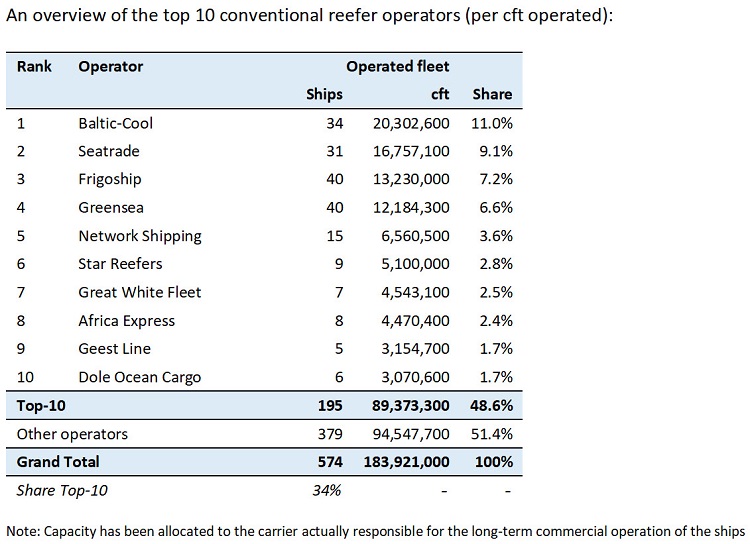 As a result of the IMO 2020 sulfur cap, Dynamar expects many old and fuel-hungry conventional reefer ships will be scrapped. For a time at least, both conventional reefer operators and container ship operators will receive a boost from the reduction in trade capacity, helping offset the new higher fuel costs.

New developments in the reefer shipping segment in 2018 reveal a further swing towards investment in, and a preference for the reefer container segment, of particular interest are:

•     Great White Fleet has terminated its slot allocation on the Central America Express service of MSC, which connects Central America with the U.S. Instead, the shipping arm of fruit trader Chiquita will offer two new services, deploying high-reefer capacity tonnage.

•     Fruit trader Del Monte proposes to build six fully cellular vessels of around 1,300 TEU in China. These to be operated by subsidiary Network Shipping on the U.S.-Latin America trade. The latter trade lane is traditionally the domain of conventional reefer operations.

Not all is lost in the traditionally conventional reefer segment, where apparently still money is made, says the Dynamar report.

•     Nissen Kaiun has taken delivery of an 880,000 cft conventional newbuilding with capacity for 600 TEU on deck. The Cool Express is first of a series of two. It is the biggest conventional reefer ship ever built and operated by Cool Carriers, a subsidiary of Baltic Reefers.

•     Fruit trader Del Monte orders two conventional reefer ships from China for deployment by its shipping unit Network Shipping. Each is estimated at around 20,000 dwt (790,000 cft) and on deck have a capacity for 600 TEU.

At the end of 2018, the world maritime container reefer box fleet totalled 2.9 million TEU, comprised of predominantly 40’ high-cubes. Production for the first half of 2018 was projected to reach 130,000 TEU, which is an approximate growth of 12 percent compared to the year before. For 2019, production is predicted to rise, but not by much.

In 2018, Maersk Container Industry closed its reefer factory in San Antonio, Chile after just three years. The closure of the $200 million production plant leaves it with only one facility in Qingdao, China.

12 major container carriers in 2017 operated 2.08 million TEU of owned and leased boxes, or around 79 percent of the total reefer container fleet. At the end of the same year, lessors owned 49 percent of these. Triton is the main lessor of reefer boxes, ahead of SeaCo and Seacube.

Most ships in service (or listed as idle) at the time of publication were built between 1988 and 1994, with another peak in 1998. Although the order book is modest, it is an increase after years of virtually no newbuilding activity; in 2014 two ships were delivered, and in 2015 one. In the first half of 2018, four vessels were completed, while another nine were scheduled for delivery before the year end. Combined, these units offer capacity for 4.6 million cft. Many of the vessels are small, only three over 300,000 cft with container capacity of 1,760 TEU (940 reefer points).

Apart from ships coming to the end of their technical lifetime, often vessels are demolished in batches when the market dips. In 2017, some 25 ships were sent to the breakers with an average age of 23 years. Of these, some small units were 36 years old.

In the first half of 2018, 19 ships were reported demolished, with combined cargo space for 7.5 million cft. The average age of these was 33 years. Also, 12 400,000 cft capacity vessels were included in this particular batch. For the full year, it was expected that some 30 ships would find their way to the breakers with an aggregated capacity of 11 million cft.

There is no room for nostalgia and the decline in the conventional reefer fleet persists. Dynamar expects therefore the fleet to fall to around 310 ships (100 million cubic feet) by 2030.

The U.S. Department of Transportation’s Maritime Administration announced the availability of $19.6 million in funding to small shipyards through the Small Shipyard Grant Program. The program is designed to support efficiency improvements and modernizations that allow U.S. shipyards to compete more effectively in the global marketplace.  “America’s shipyards are a vital foundation for both our national security and our nation’s economy. U.S.-Flag commercial vessels—built and maintained right here in the U.S.—carry not only military equipment and supplies, but many carry...