23 shipping containers are being placed around the wreck of the car carrier Golden Ray in an effort to reduce tidal flow effects during salvage operations.

The 20,000 dwt Golden Ray partially capsized on September 8, 2019 while heading outbound from the Port of Brunswick, Georgia.

The containers will be placed in semi-circles around both the bow and stern using the crane barge Weeks 541 owned by Weeks Marine. Each will be filled with porous rock and will have screened holes to enable water flow. Sonar technology is being employed to guide the placement of the containers in real time.

Around 6,000 tons of aggregate rock has already been placed around the ship’s hull to reduce erosion. This was done in October last year. The area experiences strong tidal currents, and at that time the wreck had listed from 90 to 100 degrees.

Shipowner Hyundai Glovis has appointed Galveston-based T&T Salvage to demolish the vessel in place. The plan calls for cutting the ship into eight large sections, then hoisting and removing each section by barge. Some of the 4,200 new cars contained within the Golden Ray's hull are expected to fall into the water during the operation, according to court filings.

Over half of the 80 steel piles that will be used in the construction of a 33-acre environmental protection barrier have been installed, reports The Brunswick News. Each pile is 140-foot-long; half of this length will be below the seabed. They will support a mesh barrier designed to trap any vehicles lost or debris created by the salvage operation.

The barrier will have a gate that enables the access of the VB 10,000 barge which will straddle the wreck. The vessel will be cut into sections weighing between 2,700 and 4,100 tons each. The sections will be transported to a recycling facility in Louisiana on a barge with a walled deck. 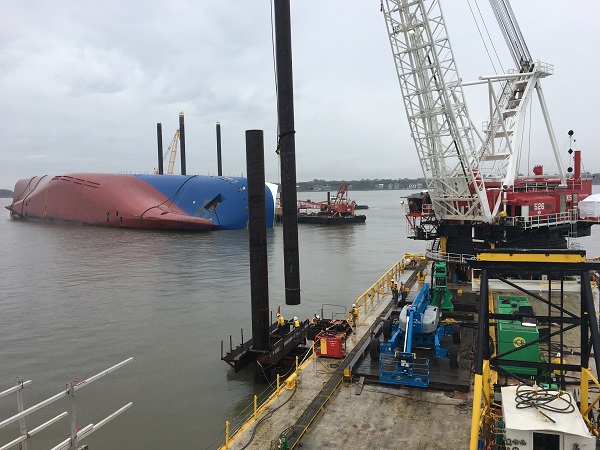