Cocaine and Two Stevedores Discovered in Container on Maersk Boxship

Mexican authorities are reporting the seizure of more than $1 million worth of cocaine along with two individuals when the Maersk Line container ship Svendborg Maersk arrived at the port of Manzanillo in the Colima region of Mexico. Local officals said that it was unusual to find individauls hidden in the container working as guards on the shipment.

An inspection of the Svendborg Maersk carried out by the port in cooperation with the Mexican Navy, the Manzanillo customs and attorney general's office, discovered two men who were not crew members along with two packages that did not correspond to the ship’s manifest concealed in a container aboard the ship. Each package reportedly contained 45 packages in the form of a brick, which later tested positive for cocaine. The total weight of the shipment was reported at 102.6 kilograms. 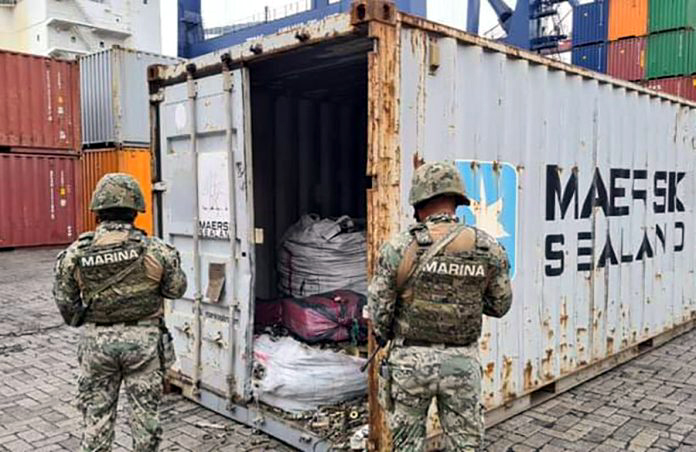 Maersk issued a brief statement saying, “We can confirm that authorities at Manzanillo Terminal are conducting an investigation after allegedly two stevedores were found hidden alongside narcotics in one container onboard Svendborg Maersk on July 2, 2020.” The company said that it was collaborating with the Mexican authorities in charge of the case and noted, “Maersk does not accept illegal cargo and we have guidelines in place to guide staff on screening and handling cargo bookings, to be alert to anything unusual or suspicious.”

The Mexican Navy reported that the alleged illicit cargo and the two male detainees were handed over to local authorities while the investigation was ongoing.

The 9460 TEU vessel had sailed from Buenaventura, Colombia on June 21, with stops at Guayaquil, Ecuador, and Balboa, Panama before arriving in Mexico. The voyage was scheduled to continue to Yokohama, Japan, Busan, South Korea, and Ningbo and Shanghai in China. Built in 1998, the Svendborg Maersk was also in the news in 2014 when the vessel lost more than 500 containers overboard during bad weather in the Bay of Biscay.