Coastal Ro/Ro Freighter Beset By Ice in Sea of Okhotsk

The Lovtsov sent a distress signal on January 4, according to Russia's Ministry of Emergency Situations. The master reported that the vessel was caught in the ice at a position about 10 nm off the coast of the Shantar Islands, a remote and uninhabited archipelago on the sea's eastern margin. He expressed concern that his ship might sustain hull damage from the ice and called for the evacuation of the vessel's eight crewmembers.

The ministry said that it would dispatch a Mi-8 rescue helicopter from Khabarovsk to assist. According to RIA Novosti, the helicopter will fly to the town of Chumikan, where it will take on more fuel before flying out to the Lovtsov's position. The flight will have only limited time on station due to the distance covered.

The Lovtsov is a coastal ro/ro freighter with a bow ramp, and it is home-ported in Korsakov, Sakhalin. According to AIS tracking data provided by Pole Star, in the weeks before the incident she was operating between the Siberian mainland and Feklistova Island, the second-largest island of the Shantar archipelago. 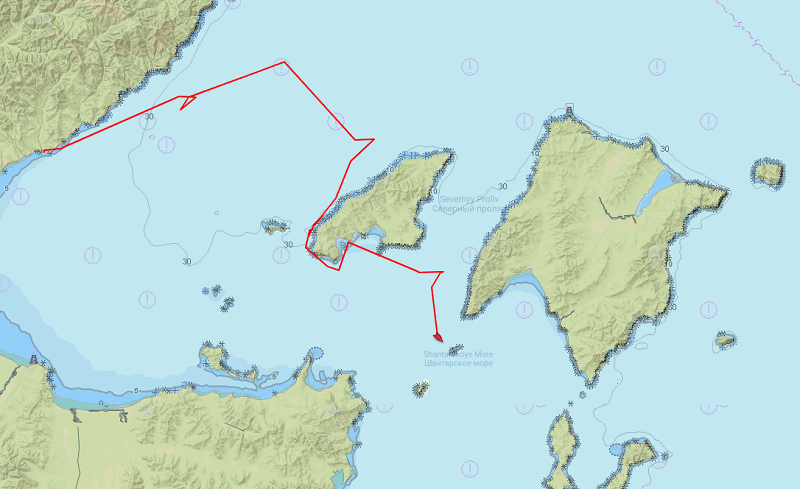 The Grigory Lovtsov's itinerary over the two weeks leading up to the incident, along with her last received position, January 4 (Pole Star)

The shallow Sea of Okhotsk has lower salinity due to river inflow, which allows it to freeze at a higher temperature, according to NASA's Earth Observatory. Aided by frigid westerly winds blowing off Siberia, the sea periodically freezes up between October and March. At that time of year, ice can sometimes be found in the Sea of Okhotsk as low as the 45th parallel - roughly the same latitude as the Bay of Biscay or the Salish Sea.