First responders have swung into action in the wake of Hurricane Michael, providing assistance to survivors and beginning the difficult task of searching for the missing. 17 deaths have been confirmed so far, and teams are still combing the debris left by the storm.

As of Thursday night, the U.S. Coast Guard reported that it had assisted 232 people and rescued 40 across the breadth of the disaster zone. In Panama City, a Coast Guard shallow-water response team assisted more than 140 residents at a rehabilitation center, providing food, water, and oxygen for the patients and helping them board buses for relocation.

Coast Guard port evaluation teams are on the ground and assessing damage to speed the reopening of waterways in Pensacola and Panama City. Pollution response personnel are evaluating waterfront facilities, sunken, damaged or capsized vessels and conducting overflights to determine the extent of any environmental harm.

The Florida National Guard and Guard units from around the country have deployed to assist with the search, rescue and recovery effort. Roughly 3,200 Guard members have been activated, and have been helping out with everything from with road clearance to temporary satellite communications. 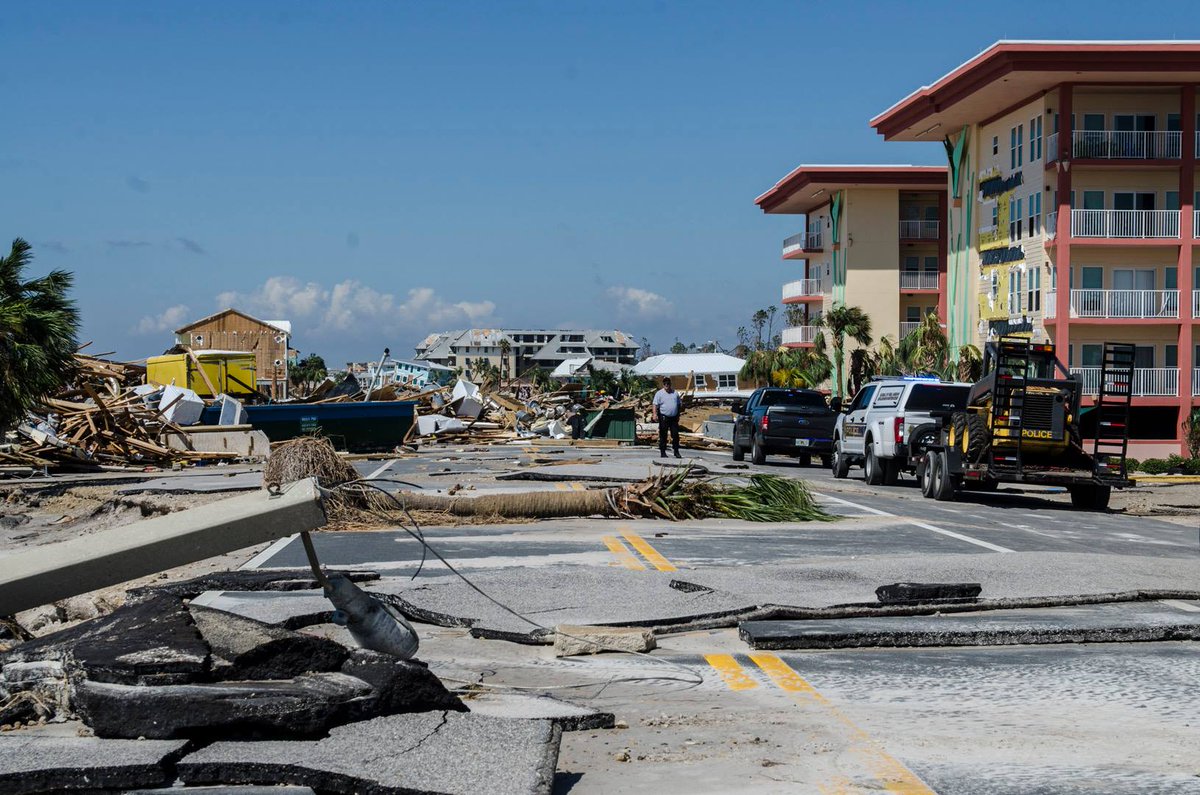 Their assistance is much needed in seaside communities like the town of Mexico Beach, where Michael's 155-mph winds obliterated blocks of houses. Former mayor Tom Bailey told the New York Times that "the mother of all bombs doesn't do any more damage than this." A city official, Tanya Castro, told CNN that the community will not be functioning again for at least a year.

The region suffered damage to housing stock, marinas, commercial buildings, but it also lost access to many of its health care facilities. Federal officials told media that about 14 assisted living facilities, 13 nursing homes, several dialysis centers and four hospitals are currently shuttered. In addition, at least 1.15 million customers between the Gulf and the Mid-Atlantic are without electrical power.

President Donald Trump said in a Twitter update Friday that he intends to visit both Florida and Georgia early next week. "People have no idea how hard Hurricane Michael has hit the great state of Georgia," he said.

A century since granting of its royal charter, the Institute is looking to the future with program to help port agents and surveyors spot illegal cargoes London, 21 January 2020. The Institute of Chartered Shipbrokers has celebrated 100 years today since the granting of its Royal Charter by unveiling plans for a training program to help port workers and surveyors spot the signs of wildlife trafficking in the maritime supply chain. The program is backed by a formal resolution which...

On Sunday, Turkey upped the ante in its dispute with Cyprus over drilling rights in the Eastern Mediterranean. For the first time, it has deployed a drillship to an area south of the island, the region where the Cypriot government has bid out gas exploration leases to international companies like Eni and ExxonMobil.  “Our drillship, Yavuz, was relocated on [January 17] to the Block G in the south of the island in order to conduct its third drilling activity as...

The new American-built con/ro Lurline made her maiden call in Honolulu on Friday, marking a transition in the way that Jones Act carrier Matson operates its West Coast-to-Hawaii service. Relative to many of Matson's vessels, Lurline is fast, with a top speed of 23 knots. That extra speed will allow the company to drop down from ten ships to nine while keeping cargo volumes the same, according to CEO Matthew Cox. The higher speed will also give shippers simplicity...

On Saturday, the U.S. Coast Guard provided a long-range medevac for a seafarer from the cruise ship Azamara Journey. The crewmember fell ill while the Journey was transiting from Maui to Bora Bora, and the USCG arranged to bring him from the remote island of Kirimati (Christmas Island) back to Hawaii for treatment.  At 1840 hours on Friday, Coast Guard watchstanders at JRCC Honolulu received a message from the master and ship's doctor of the Azamara Journey. A crewmember had...