The carriers despite near-term drops in volumes on many routes are continuing to upsize capacity on more trade routes as they add larger ships to their fleets. In the latest example of this effort, CMA CGM is placing two of its large vessels onto the route between Japan and Central and South America.

The first of these ships arrived in Yokohama, Japan on January 15 becoming the largest containership to call at the terminal. The CMA CCGM Argentina, built in 2019, has a maximum loading capacity of 15,074 TEU. The 1,200-foot containership is 180,000 dwt making it the largest to enter Yokohama Port at the Honmoku Wharf D4.

“The introduction of the larger vessels on the ACSA1 service will not only accommodate more Yokohama-bound fresh produce on a single voyage, they are part of our plans to grow inbound cargoes from Central and Southern America,” said Hideki Uchida, President of CMA CGM Japan. “The CMA CGM Group’s 15,000-TEU series of vessels will stand as the largest regular service vessels to call in Japan. Importantly, they equip us with more capabilities to further facilitate trade flows between Latin America and Asia.”

The vessel arrived carrying cargoes that included fresh fruits as well as coffee and malt from South America. They plan to use the increased capacity and refrigerated container capabilities to expand fresh imports from countries including Ecuador, Guatemala, Colombia, and Mexico. After Japan, the vessel departed on January 16 for Busan. The route starts in China proceeding to the Americas before returning to Japan and South Korea.

CMA CGM leases the D4 terminal from the Yokohama-Kawasaki International Port Corporation. The companies recently reached an agreement that will see CMA CGM further expand its operations in Japan by moving to the redeveloped, larger D5 terminal in 2026. 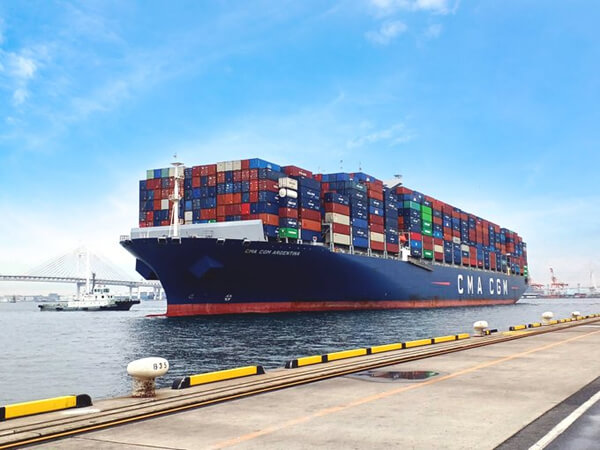 The carrier has been rearranging vessels on a number of its routes to expand capacity. The CMA CGM Argentina had been operating to the U.S. East Coast and had been the largest containership to call at PortMiami. She had been used to increase capacity on the East Coast, but in November she was replaced by the slightly larger CMA CGM Osiris on the route from China and Asia via the Panama Canal to Miami and other U.S. East Coast ports.

In the year ahead, the industry is preparing for an influx of ultra-large container vessels. MSC and OOCL are following Evergreen’s lead with each introducing vessels with a capacity exceeding 24,000 TEU. Hapag-Lloyd is also expected to start the introduction of its first ultra-large vessels. All of these ships will be operating on Asia to Northern Europe routes, freeing up other vessels to continue the upsizing of capacity by shifting to routes such as the Japan and U.S. East Coast services.