China wants an equal and dignified trade agreement with the text to any deal balanced.

"We know that every nation has its dignity, so the text ought to be balanced," said Vice-Premier Liu He late Friday, at the end of two days of trade talks in Washington.

U.S. President Donald Trump has ordered that tariffs on $200 billion worth of Chinese imports now be raised from 10 to 25 percent, and hours after the Chinese delegation left Washington, U.S. Trade Representative Robert Lighthizer announced additional tariffs on the remaining approximate $300 billion worth of Chinese imports that haven't already been targeted.

Liu said: "If the U.S. increases tariffs, we must respond." A response has not yet been announced, but he said that he was optimistic about China's economy in the longer term, despite the pressure being exerted.

The tariffs have been a key issue in reaching a resolution to the two nations' ongoing trade war. "If both sides want to reach an agreement, then all (additional) tariffs must be eliminated," Liu told reporters at China Daily. He said that China and the U.S. now also have differing views on the volumes of trade purchases that China would make from the U.S.

Trump said in a tweet on Friday: "Tariffs will make our Country MUCH STRONGER, not weaker. Just sit back and watch! In the meantime, China should not renegotiate deals with the U.S. at the last minute."

Liu refuted allegations that China reneged on its commitments and called for the two countries to cooperate for the benefit of themselves and the world. Overall, the two sides are meeting each other halfway in the draft text of an agreement, Liu says, but there needs to be discussion on key issues. "We believe that it is only natural to have changes before a final deal; it is something that surely occurs in the process, so we don't think the Chinese side has back-walked," he said. "We just had differing views on how to phrase some things in the text, and we hope to resolve it, so it's unnecessary to overreact to the issue," he said.

"We have tremendous common interests and many common foes, only through cooperation could we solve these problems," Liu said.

The two nations expect talks to continue, and Trump continued his tweeting on the topic over the weekend. 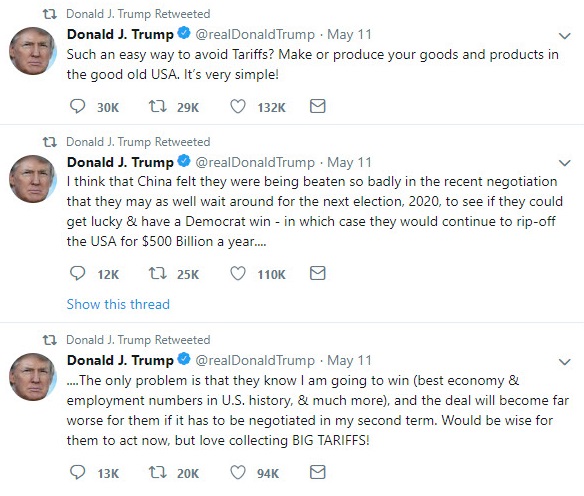