China reported that it has put into service its first fully electric tugboat, one of a small number of electric tugs in the world. The first electric tug was launched a year ago by a Turkish shipyard while the United States’ first electric tug is not due to enter service until mid-2023 built for Crowley Maritime.

The Chinese Yungang Electric No. 1 went into service on August 16 at the northeastern Chinese port of Lianyungang in Jiangsu Province on the Yellow Sea.

The tug uses a lithium iron phosphate battery pack as its power source, which the authorities report can achieve 4000 horsepower, similar to conventional tugboats. The port reports that based on the power output it will be possible to replace traditional high-power fuel tugboats.

The electric tug was built by the Lianyungang Port Holding Group's Barge Branch. It has a total length of 116 feet, a beam of 33 feet, and a draft of 11.5 feet. The total power design is 5000 kWh, which provides the tug a top speed of 13 knots. The tug can operate for up to eight hours between charges.

According to estimates, the electric tugboat can save about 300 tons of fuel consumption each year and will reduce emissions of about 900 tons of carbon oxide each year, which is equivalent to the emission reduction of more than 400 cars.

Lianyungang is a busy port handling iron ore, coal, laterite nickel ore, plywood, mechanical equipment, and other goods. In the first half of the year, the throughput at the Lianyungang Port reached 134 million tons, a record high for the operation. Among the vessels moving through the port are international bulkers, Ro-Ros, LNG carriers, and containerships as well as domestic vessels. The largest vessel to call at the port was 95,700 dwt Double Pride, a bulker carrying fertilizer that arrived for the first time earlier in 2021. 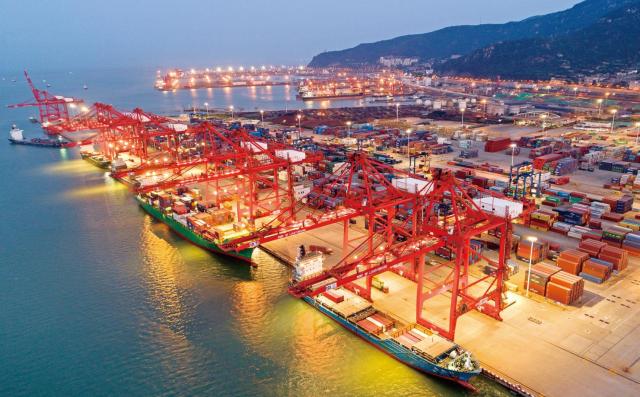 Lianyungang harbor where the electric tugboat is operated (government photo)