MSC’s growth as the world’s largest container shipping company is continuing unabated despite continuing signs of a near-term softening in the market and falling demand. The carrier, which was tied with Maersk at the beginning of 2022 for the largest carrying capacity, has continued to expand. At the end of last week, two more ultra large container vessels were floated by their Chinese shipbuilder as MSC prepares to start operating a new class of vessels that will be the largest containerships yet built.

Yangzijiang Shipbuilding Group reported that it floated two of the new vessels being built for MSC under a financing deal with two Chinese bank’s leasing companies. The vessels, MSC Irina and MSC Loreto, are reported by their Chinese builders to be the largest deadweight and largest container capacity vessels in the world. They estimate the deadweight tonnage at over 240,000 dwt while reporting that each of the vessels will have a rated capacity of 24,346 TEU. The highest container stack on the new ships is 25 layers.

The float out took place on October 29 with the shipyard reporting that they had been built with a docking cycle of 144 days. Work began on the two ships on November 29, 2021, with dock assembly beginning on June 7, 2022. They were floated for the first time on August 10. 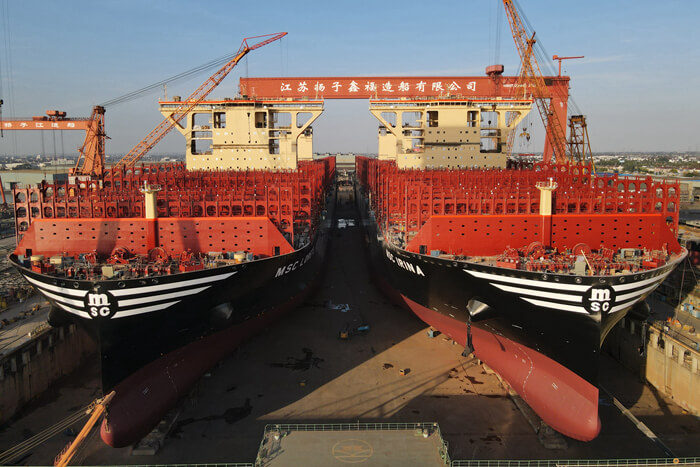 The ships are the first 24,000 TEU class containerships built by Yangzijiang. The shipyard highlights numerous design elements all helping to improve the vessel’s operating efficiency and reduce fuel consumption and emissions. They report that the ships have a new type of “invisible” bulbous bow, large-diameter propellers, and energy-saving ducts, as well as adopting a low wind resistance exterior design. They also have a shaft generator and use air lubrication along the hull. Onboard a new system will improve fire safety.

Yangzijiang also reports that vessels had a high level of completion when they were moved from the dry dock. Among the elements already completed are the engine and steering room compartments, as well as the accommodations block. The ballast, oil, and water tanks are all sealed and inspected. Other elements including the hatch covers and windlass have also been commissioned while elements such as load testing will be completed at the dock. No timeline was reported for the delivery of the ships.

The new giants join a rapidly growing MSC. Since equaling and then surpassing Maersk at the beginning of 2022, MSC has added nearly 10 percent in capacity surpassing 4.5 million TEU with 708 vessels according to Alphaliner’s current calculations. MSC is reported to have another 125 ships on order for an additional 1.7 million TEU in capacity.

Alphaliner reports that the Swiss-based shipping company is not done with its growth. MSC is believed to be in the market for another newbuilding order for a class of containerships with a capacity of 8,000 TEU.

In addition, MSC has also been aggressive the secondhand market. With charter rates on the rise, the carrier is believed to have moved aggressively at buying ships, many of which were previously operating under charter to the line. Alphaliner is reporting that MSC recently completed three additional acquisitions of smaller vessels with a capacity each between 2,500 and 6,000 TEU. Over the past two years, MSC has acquired a total of 250 containerships according to Alphaliner’s calculation.