U.S. Customs and Border Protection has stirred up a storm in the Alaska pollock fishery by issuing Jones Act penalty notices totaling about S350 million. According to a lawsuit filed by an affiliate of catcher-processor giant American Seafoods Company (ASC), the fines could raise the price of pollock and even lead to shortages in the eastern U.S., the region affected by the enforcement action.

Through the operations of its Alaska Reefer Management affiliate, American Seafoods routinely delivers Alaskan fish to customers on the U.S. Eastern Seaboard using chartered foreign-flag vessels. These ships are loaded in Dutch Harbor, then transit through the Panama Canal and around the East Coast to the port of Bayside, Canada. At Bayside, the cargo is offloaded into truck trailers for delivery to the Eastern United States. About 90 percent of the fish offloaded at Bayside is delivered to markets in the U.S., manager Manny Estrada told the St. Croix Courier in 2018. 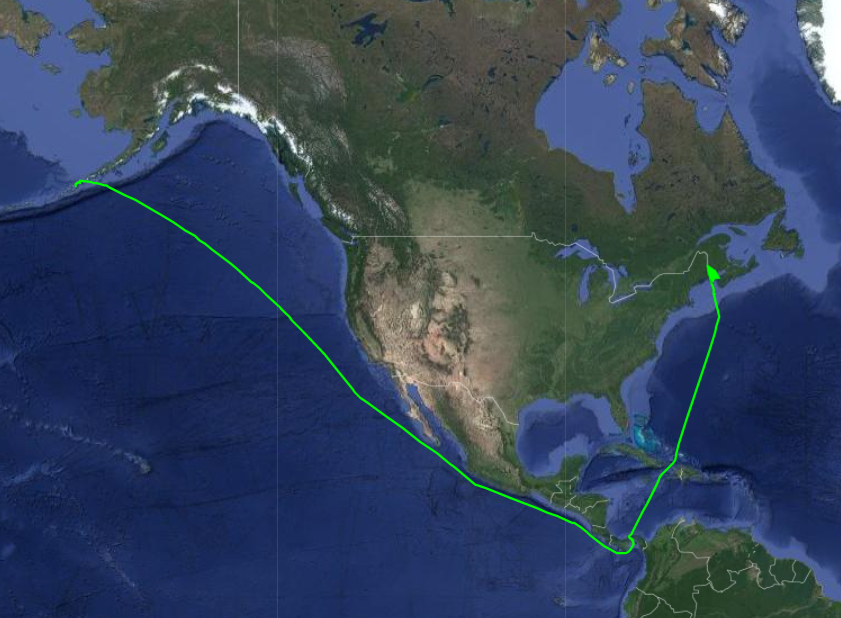 A typical voyage from Dutch Harbor to Bayside: the trackline of the reefer Wellington Star in September 2019 (Pole Star)

If the trucks carrying this fish drove directly into Maine, the whole arrangement would be prohibited by the Jones Act, which bans the use of foreign vessels to transport goods between U.S. points. However, the Jones Act contains an obscure historical exception for cargo that makes part of its transit on a registered Canadian rail line, known as the "third proviso." 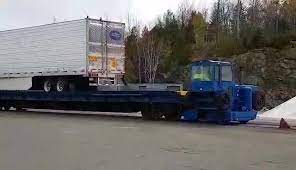 To meet the terms of this little-known exemption, each truckload of fish at the Bayside terminal is driven up a ramp and onto the sole train of the "Bayside Canadian Railway" - a 100-foot stretch of track with two rail cars and no destination (left, courtesy Kloosterboer). A small shunt engine pulls the train to the far end, nearer to the office of the Bayside Port Corporation, then pushes it back to the ramp again. Having completed this Canadian rail journey, the truck drives back down the ramp, out to Route 127 and across the border to make its delivery in the Eastern United States.

Videos of the rail line have been removed from the terminal operator's social media site, but a 3D street-level view may be found here.

While the train and track may be small, the railway is properly certified and registered as a Canadian rail line with the U.S. Surface Transportation Board, noted attorneys for American Reefer Management (ARM) and terminal operator Kloosterboer International Forwarding (KIF). The arrangement has been in place and running for years, and it has always been duly noted on customs paperwork, according to the filing.

CBP has previously ruled that similar arrangements using short-distance Canadian rail transport are acceptable. However, in mid-August, the agency began issuing multi-million-dollar penalties to Bayside's operators and users for unspecified Jones Act violations. The 170-plus notices include nearly $25 million in fines for KIF and an additional $325 million in fines for other participants, including ASC subsidiaries.

Five shipowners who served the route have received penalty notices totaling $65 million, and they have notified ARM that they hold it responsible, according to the filing. Two importers and nine trucking companies whose vehicles passed over the Bayside Canadian Railway may also be on the hook for $95 million.

According to the suit, the total size of the fines is more than twice the annual value of all the frozen Alaskan seafood that passes over the Bayside facility's docks. ARM and KIF say that the fines and the threat of further regulatory action have shut down the shipping route, and that some truckers will not pick up the product that is already in storage at Bayside for fear of further penalties.

"This unjustifiable agency overreach is crippling and threatens to destroy plaintiffs’ businesses, along with an entire supply chain transporting frozen seafood from Alaska to the eastern United States through Bayside," attorneys for ARM and KIF said. "Moreover, the penalty notices are threatening hundreds of jobs in Alaska and throughout the U.S. in the frozen seafood shipping industry, and unless they are withdrawn, will likely result in higher prices and shortages of frozen seafood across the eastern United States."

CBP has declined to comment about the details of the case, citing ongoing litigation.

American Seafoods started as a Norwegian-owned operator in 1988, and it became majority-U.S.-owned after the passage of the American Fisheries Act in 1998. It uses six U.S-built, foreign-modified catcher processor vessels in in its U.S. fishing operations.