The U.S. Navy's long-delayed next generation carrier, USS Gerald R. Ford, is under way on an operational deployment at last. Escorted by warships from four allied nations, she transited north from Virginia to Halifax, arriving October 25, and she departed once more for the open seas of the Atlantic on the 28th. The carrier is rumored to be headed for the Royal Navy's main base at Portsmouth, UK, as tensions between Russia and NATO continue to rise in the European theater. She is expected to anchor in the sheltered waters of the Solent in mid-November.

Ford's air wing is giving the carrier's novel electromagnetic catapults and arresting gear a workout, the crew told Navy Times. They're also working on joint training with vessels from Spain, Denmark, the Netherlands and Germany.

"We have been operating alongside our allies and partners on the high seas, training our interoperability and interchangeability," said Capt. Paul Lanzilotta, commanding officer of the USS Gerald R. Ford. "Visiting Halifax gives us a chance to build even stronger relationships with our teammates, strengthening our partnership." Though Ford is not carrying the latest generation of F-35C stealth fighters - she will not be able to operate with them until 2025 - she brings a nearly-full air wing of F/A-18 Super Hornets, the backbone of the strike fighter fleet. This will add capability in the European theater, and will complement the George H.W. Bush Carrier Strike Group, which is operating in the Adriatic. 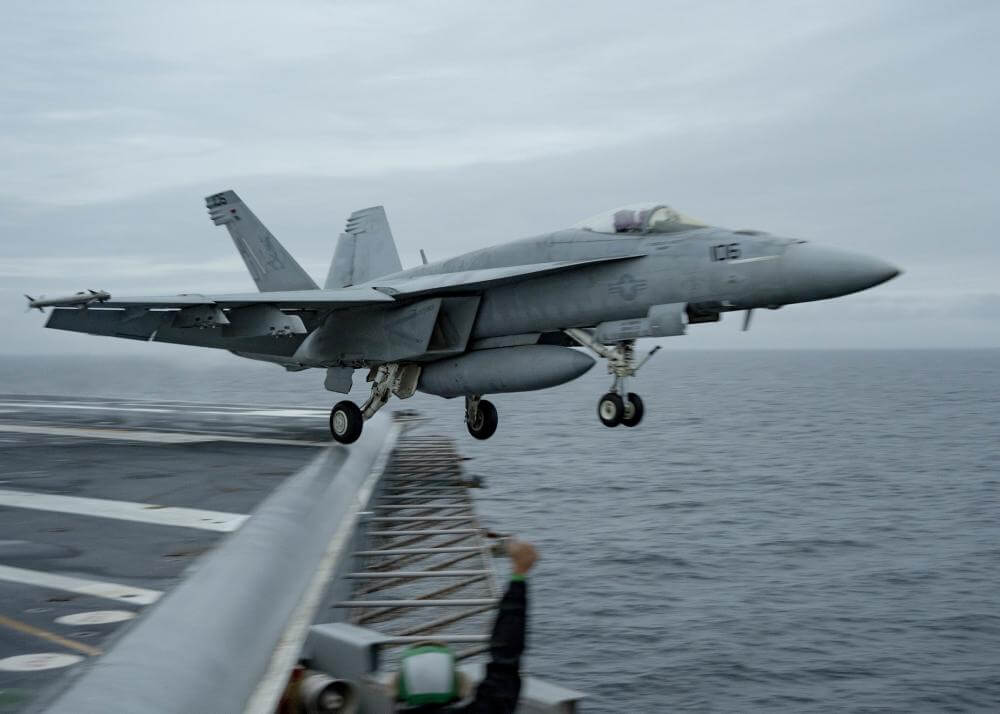 For her first deployment, Ford remains under the control of the U.S. Navy, and she will not be directly in the chain of command of the regional combatant commander - in this case, Gen. Tod D. Wolter (USAF), Commander, U.S. European Command.

Ford's first deployment was a long time coming. Her launch and recovery gear and her weapons elevators are all electromagnetic, a technological departure from the previous Nimitz-class carriers, and post-delivery installation and commissioning work took more than four years. The Navy accepted delivery of Ford in 2017, but the process of working up to full capability continued until this year.

Her electromagnetically-actuated weapons elevators were among the most difficult systems to complete, and the last was finished at the end of 2021. Now that they are operational, they allow Ford's crew to move munitions from the magazine to the flight deck at a much faster clip, which is essential to generating sorties.

"The ammunition elevators are an exceptional example of a painful process over the past four or five years," said Chief of Naval Operations Adm. Mike Gilday in an interview in July. "We really shouldn’t introduce more than maybe one or two new technologies on any complex platform like that in order to make sure we keep risk at a manageable level."