Carpathia was a workhorse. It wasn’t one of the glamorous express transatlantic liners built to compete for the Blue Riband and designed to resemble Versailles. Only once was it met by hordes of photographers with flashbulbs popping when she arrived in New York.

Built by C S Swan and Hunter at Wallsend, and launched with little fuss on August 6, 1902, the 13,603 grt Carpathia – capable of just 14 knots – was intended to carry Hungarian emigrants from the Mediterranean ports of Trieste and Fiume to New York and a new life in the United States. This role was secured in the long term for the vessel, Slavonia and Pannonia in 1904 when Cunard was granted the Hungarian Government contract to carry emigrants, but its maiden voyage was from Liverpool to Boston in 1904. In November of that year Carpathia took up her Mediterranean duties, plodding backwards and forwards year in, year out, without incident, carrying emigrants westbound at a fare of £5.10 s and American tourists or returning emigrants eastbound.

On Thursday April 11, 1912, Carpathia left New York almost unnoticed just after noon bound for Trieste as usual on a journey which, for momentous reasons, it would never complete, but a journey which would take it from insignificance to celebrity.

At about the same time on the other side of the Atlantic, a hugely celebrated ocean greyhound was leaving Queenstown and heading west on her Maiden Voyage to New York. It was Titanic, brand-new pride of the White Star fleet, commanded by Captain Edward Smith, on his last voyage before retirement. Titanic had on board many rich and famous socialites, the celebrities of the day, and her departure from Southampton had been ad feted as Carpathia’s had been unnoticed.

In command of the little Carpathia was 42-year-old Arthur Rostron, an officer with Cunard since 1895 and master of Carpathia for just three months. With him were 700 passengers, 150 of them elderly American tourists and most of the rest former emigrants making a visit home.

At 12:15am on the morning of April 15, Carpathia’s wireless operator Harold Cottam was in the process of untying his shoes in readiness for bed. He was ten minutes later than he normally would be in turning in, and providentially his ear phones were still clamped to his head. Had he not been, and had they had not been, there would have been no Titanic survivors.

On receiving the first SOS from Titanic at 12.15, Cottam raised Captain Rostron who had already retired for the night, and Rostron in turn rose to the challenge of his first maritime emergency with impeccable practical thoroughness.

After a brief moment of disbelief in which he quizzed Cottam about the certainty of his seemingly preposterous claim that Titanic was in distress, Rostron immediately ordered a change of course. Carpathia was 58 miles from Titanic. At 14 knots it would take her over four hours to get there.

The chief engineer was ordered to turn off all the heat and hot water so that every ounce of steam could be used to drive the engines. All off duty stokers were raised from their beds to shovel coal into the furnaces as fast as they were able.

Next, Rostron ordered his first officer to begin specific preparations – the lifeboats were to be slung out, lighting rigged along the ship’s sides, all shell doors were opened in readiness, and slings made to haul up the children and the infirm, ladders and rigging lowered, and the ship’s forward cargo cranes made ready to lift aboard luggage, belongings and lifeboats.

Meanwhile, all remaining crew were summoned to duty and preparations were made to receive 2,000 Titanic passengers in the public rooms. Blankets and warm clothing were gathered to distribute, and tea, coffee and soup were prepared. 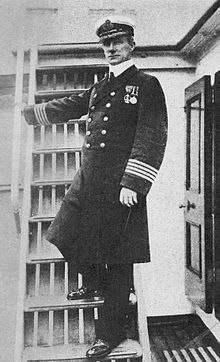 First aid points were established in the three dining rooms, with a doctor in charge of each. When all was ready, the ever-thoughtful Rostron ordered his crew to take hot coffee in preparation for the long night ahead.

The ship, meanwhile, strained and shuddered as it edged past her maximum speed as every stoker shovelled coal into the furnaces. 15, 16 and finally 17 knots were achieved as the ship surged through the dark, without radar, past glistening icebergs visible to the lookouts only by the reflection of the stars.

At 4am Carpathia reached Titanic’s position and Carpathia’s engines were stopped as the crew, together with many passengers now on deck having been alerted both by the hustle of preparations and the increasing cold in their quarters, strained to see some sign of the ship. Suddenly, they saw a green flare fired by Titanic’s lifeboat number 2 – and the first survivors came aboard at 4.10am. By 8.30am Charles Lightoller, the final person to be rescued stepped aboard Carpathia.

Now carrying double her original complement of passengers, Carpathia steamed slowly among wreckage and icebergs seeking more survivors – but none was found.

Rostron’s next decision was where to go. Halifax was nearest, but the passage would involve travelling through much ice and he felt the Titanic’s survivors had had enough of that. The Azores would have been the best destination to keep Carpathia on course and incur the least cost to Cunard, but the ship had insufficient supplies for such a journey with such greater numbers, so Rostron headed back whence he had come – New York.

Carpathia’s passengers and crew did what they could, giving up beds and clothing to those who had survived near-freezing temperatures often inadequately dressed, but for many inconsolable widows nothing could be done save allow them to cry themselves out.

Carpathia was besieged by calls from the press, which Rostron ordered were to be ignored, and when it finally arrived in New York on the morning of April 18 it was accompanied up river by reporters in hired tugboats shouting questions through megaphones. Never had Carpathia been the centre of so much attention.

Eventually the vessel berthed at 9.30am at Pier 54, from which it had set out just seven days earlier.

Though much praised and decorated for his calm and exemplary actions, Rostron was reluctant to speak publicly about the Titanic disaster, and the references in his autobiography Home from the Sea published after retirement were self-effacing and devoid of sensation. But in response to a journalist querying many years later how the little ship could have been coerced to travel at a speed greater than the maximum of which it was supposedly capable, and how it had progressed safely at such speed through ice in the dark, the deeply religious Rostron simply replied “A hand other than mine was on the wheel that night.”

The now-famous Carpathia returned to her Mediterranean duties until 1915 when it was taken up for war service carrying essential supplies from New York to Liverpool.

But, just four months before the Armistice was signed, while in convoy from Liverpool to New York, Carpathia was torpedoed three times by U55 on July 17, 1918 just 120 miles south west of Ireland. Two and a half hours later it sank, with the loss of five crewmembers killed by an explosion. 275 survivors were picked up and landed safely at Liverpool.

Like so many others, Carpathia’s days were ended by a wartime torpedo; but unlike them, the little ship from the Tyne will always be remembered for its part in a night of tragedy and heroism.