Cargo Ship Sunk by Russian Shelling at Port of Mariupol

A small cargo ship in the Ukrainian port of Mariupol came under fire overnight reportedly injuring one crewmember and causing the vessel to sink. It is one of approximately a half dozen foreign-registered ships believed to be trapped in the city and port that has been under constant bombardment, but the Russians used the ship’s sinking as a propaganda event to blame the Ukrainians.

The Ministry of Internal Affairs of Ukraine and the Ukraine Border Guard Service both reported that a vessel in the port had issued a distress call reporting that it had been hit and was on fire. According to the Border Guard, the captain of the vessel, the 9,085 dwt Azburg issued a distress call reporting that his vessel was on fire after being shelled. He said the bridge of the vessel was destroyed and that they had been hit in the engine room and were taking on water. He was ordering the crew to abandon ship.

Ukraine’s maritime border guard reportedly assisted the wounded and evacuated the crew to safety. They however reported that the fire was spreading on the ship as it continued to sink in the harbor. Due to the unsafe conditions with the ongoing shelling of the city, they said it was impossible to conduct a rescue operation for the vessel.

"On 4th April 2022, around 22:40 [local time], the vessel was heavily fired upon by Russian armed forces after intentionally shelling the vessel twice a day earlier. Specific characteristics of firing on the vessel remain unknown, crew reported shelling, bombing and repeated hits by missiles, causing a fire in engine room," the Dominica Registry reported in a statement. "[The] administration received information that as a result of the attack and spreading fire, m.v. AZBURG sank . . . The crew managed to evacuate and found refuge on board neighboring vessels. One person was found wounded and received medical assistance." 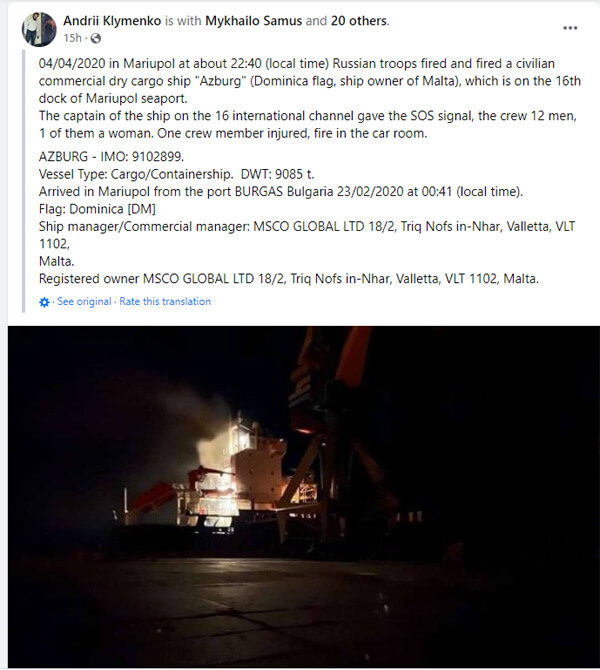 The 427-foot vessel reportedly has a crew of 12 and has been trapped in Mariupol since the beginning of the invasion. She departed Burgas, Bulgaria on February 17 arriving in Mariupol on February 23, the day before the Russians entered Ukraine.

The Ukrainian Interior Ministry released a statement reporting that the vessel was struck during “shelling from the sea” by Russia. The Russian news agency Tass confirmed the reports that a vessel was on fire in the port but said it might have been caused by Ukrainian nationalists who they said are now trapped in the industrial area at the port in the city.

The Ukraine Shipping Magazine reports that there are four other foreign-registered vessels still in the port of Mariupol. They said the vessels, which remain with their crews, are registered in Malta, Jamaica, and Liberia.