U.S. Customs and Border Protection (CBP) recently refused entry into the Port of New Orleans for a cargo ship and ordered it to depart U.S. waters after an inspection found invasive insects aboard the vessel. As part of the ongoing role of CBP, this incident also highlights a broader issue which is drawing increased interest from international organizations to reduce the risk of the spread of invasive insects and plants during cargo operations.

In the most recent incident, a Panamanian-registered bulker, the 32,599 dwt Pan Jasmine, arrived at the Port of New Orleans on July 17 and anchored just south of the port. The vessel had started its voyage in Paradip, India, and among the cargo was a shipment of aluminum held in place aboard the ship with wood packing. Arriving in Vera Cruz, Mexico the aluminum was offloaded before the vessel continued to New Orleans.

During a routine inspection, agriculture specialists from CBP observed the wood packing material scattered around the deck of the vessel. It had not been offloaded with the cargo in Mexico. The sight of the wood on the deck appeared unusual to the agents.

“No reason was provided to CBP as to why the dunnage was refused discharge in Mexico, and this raised a red flag,” said CBP.  During a closer examination of the wood material, the U.S. team saw fresh sawdust on the deck and what appeared to be burrowing holes, all of which CBP said are signs of pests in the material.

After two examinations by CBP and USDA personnel, five separate pests were found and identified. Two of the pests discovered, a type of longhorned beetle and ants, both not native to the U.S. and considered a threat to U.S. agriculture. Three other species of pets were found also in the wood, but they were more common and know to be present in the U.S. 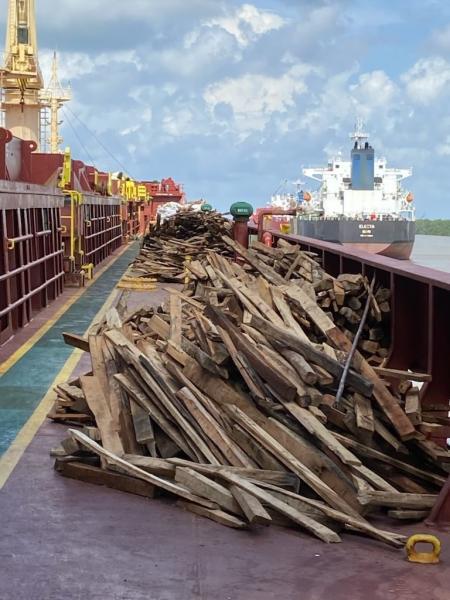 The species of beetle native to China and the Korean peninsula was first discovered in the U.S. in 1966 accidentally imported in wooden shipping materials. Within two years, nearly 7,000 trees were destroyed due to infestations in Illinois, Massachusetts, New Jersey, New York, and Ohio. According to the USDA Forest Service, between 1996 and 2013 alone, more than $537 million has been spent for eradication campaigns for these beetles.

Due to the large volume of the wood material on deck and the presence of highly mobile pests, U.S. officials ordered the vessel to immediately depart U.S. waters, load the wood material into the cargo hold, and clean the decks before returning to the U.S. The Pan Jasmine departed on July 21 to Freeport, Bahamas, for disposal services, and is now scheduled to arrive in New Orleans on July 29 or 30.

“If the dunnage had been offloaded into the U.S., it would have been put in a Louisiana landfill where the insects could crawl out and invade the local habitat, causing incalculable damage,” said New Orleans Area Port Director Terri Edwards. “Inspecting wood dunnage of otherwise lawful shipments is one of the many, lesser-known ways Office of Field Operations Agriculture Specialists help keep our country safe.”

The issue of pest migration in cargo operations is currently under discussion at the International Plant Protection Convention, an international organization formed by treaty in 1951 and overseen by the United Nations to prevent and control the introduction and spread of pests and plant products. IPPC pest control experts are considering several measures, including mandatory certification of cleanliness for all containers prior to loading on board a ship.

Five international freight transport organizations working under the World Shipping Counsel in the Cargo Integrity Group responding to the IPPC are calling for urgent action to reduce the risk of pest transference through international cargo movements.

“We know that more serious risks occur among certain types of goods and from identified regions,” said Lars Kjaer, Senior Vice President of the World Shipping Council. “The CIG recommendation centers on the need to provide proper risk assessments in defined trades and focus mandatory measures on these high-risk areas and cargoes.”

The CIG says the development of any controls must be undertaken in full consultation with other appropriate bodies, in particular the international agencies responsible for the governance of world trade and the regulation of different modes of transport, as well as supply chain stakeholders and industry practitioners. They hope to work with the IPPC to ensure an effective and efficient set of recommendations and best practices to stop the transfer of invasive species.