A Norwegian registered cargo ship and its crew have found themselves the innocent victim in a Canadian labor dispute, according to reports from a local Canadian newspaper. The vessel arrived on a normal voyage to load a cargo of aluminum from the remote smelter plant in the North Coast region of British Columbia only to find itself caught between the strikers and their employer Rio Tinto. The captain and owner of the vessel are now appealing to the strikers for their support to aid the vessel.

The 44,980 dwt cargo ship Indiana registered in Norway and owned by Saga Welco arrived in Kitimat, Canada, which is nearly 500 miles north of Vancouver, on July 17. The vessel waited in the anchorage for a position to open at one of Rio Tinto’s two wharves, which would not become available for 13 days. However, five days before the vessel was able to dock labor negotiations between Ro Tinto and the 900 workers of the Unifor Local 2301 union broken down causing a strike.

After the strike began, Rio Tinto advised that it would be reducing production at its BC Works aluminum smelter to around 35 percent of the smelter’s 432,000 ton annual capacity, so that it can safely be operated by staff and employees that remained on the job. Outside the plant, a line of boisterous strikers jeered anyone or company that crossed their picket lines.

The Indiana has remained stuck waiting for its cargo for four weeks and on the dock for the last 20 days. The vessel is running out of the low sulfur fuel it is required to burn at the dock under Canadian environmental regulations and the fuel subcontractor is refusing to cross the picket lines to deliver fuel to the vessel. Further, because of Canada’s COVID-19 restrictions, the crew has had to remain aboard the ship not permitted to disembark. 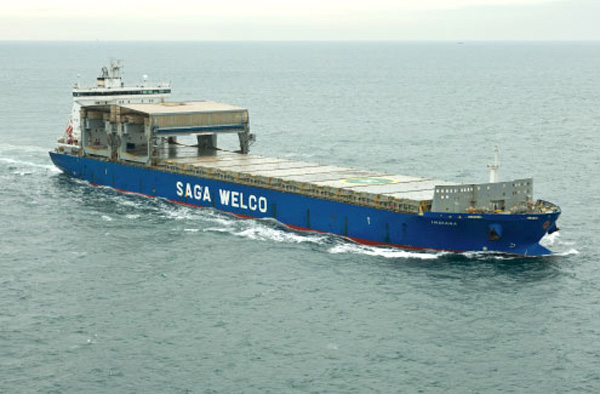 “MV Indiana is the unwitting victim of the Rio Tinto strike in Kitimat,” the sole fuel supplier in the region told the Terrace Standard newspaper. The fuel supplier said there was only one subcontractor able to complete the delivery and they feared scorn or possible retribution if they crossed the picket lines. Similarly, the only tugboat company servicing the Rio Tinto terminal is also refusing to cross the picket lines to help the Indiana.

The vessel does have high sulfur fuel but it is not permitted to use that under the environmental regulations. Saying that they are the innocent party in all of this, the captain and Saga Welco are appealing for cooperation from the union citing that the crew aboard is also union members not seeking to break the strike.

Negotiations between Rio Tinto and the union have broken down. The two sides met to discuss the possibility of resuming talks, but so far, no new talks have been scheduled.