In the effort to develop solutions for the shipping industry to address carbon dioxide (CO2) emissions, a new concept is being proposed that uses cryogenic technology to capture CO2 emitted by ships and store it in liquid form. Norway’s TECO 2030 ASA and Chart Industries, based in the U.S., sign an agreement to jointly develop technological solutions.

The agreement involves the joint development of onboard carbon capture solutions for ships using the cryogenic technology developed by Sustainable Energy Solutions, which was acquired by Chart Industries in December 2020. The concept is to separate the CO2 from the ships’ exhaust gases, that through cryogenic technology is converted into a high purity liquid CO2 product.

The liquid CO2 is then stored onboard in cryogenic storage tanks until the ship reaches port. When it has been offloaded from the ship, the CO2 can then either be permanently stored in geological formations underground or be put to beneficial use in CO2-consuming industries, such as the agricultural, industrial, energy, or food and beverage sectors. 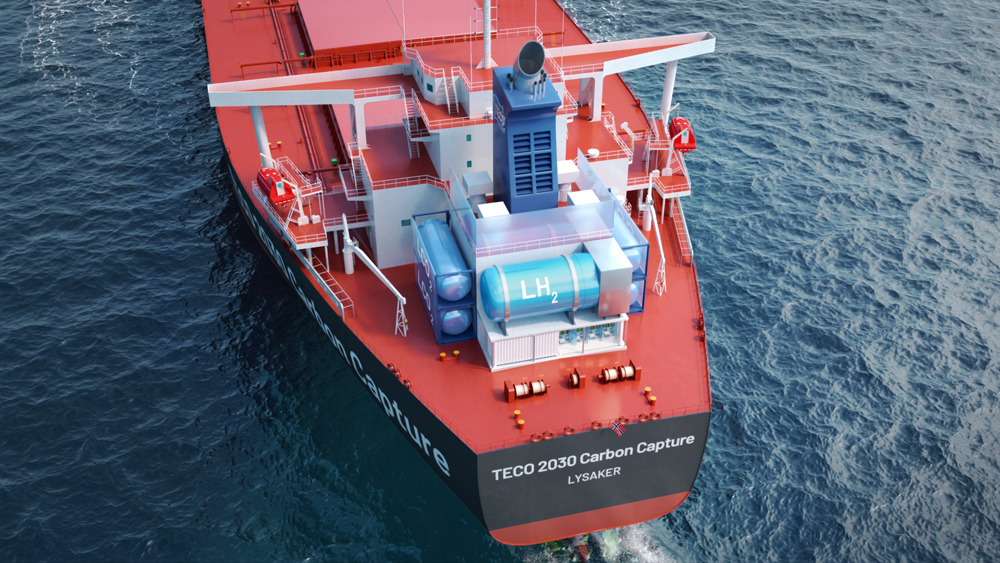 “When the new CO2 capture integration that we are collaborating with Chart Industries and Sustainable Energy Solutions on is ready, it will enable ships to capture and store the CO2 that they would otherwise have emitted into the air, and which would thereby have contributed to climate change,” says Stian Aakre, CEO of TECO 2030. “We believe carbon capture for ships will become one of several measures needed for the shipping industry to reach global decarbonization goals.”

The companies believe that their solution can overcome the hurdles to develop carbon technology at sea. The storing of CO2 is space-consuming, whereas space is always at a premium on ships. According to the companies, each ton of fossil fuel consumed by a ship produces approximately three tons of CO2 emissions. Use the technology to achieve liquification will result in a reduction in the space required and will turn the CO2 into a usable product.

TECO 2030 envisions incorporating the carbon capture technology into the designs the company previously released for what it calls the Future Funnel, an exhaust gas cleaning system for ships developed by TECO 2030. The system is a combination of a closed-loop used for vessels operating in areas where discharges overboard are prohibited, and the alkalinity of the seawater is low and open loop. The hybrid system can be used as either an open or closed loop, depending on the requirements and rules of the geographical location. Adding in carbon capture they believe will provide the most versatile solution for ship owners and operators.