The captain of a cargo ship registered in Panama that grounded off Bulgaria last September pleaded guilty to criminal charges for his role in the incident and has been ordered to partially reimburse the state for expenses related to his prosecution. In announcing the agreement, Bulgarian prosecutors declared their intent to also file charges against the first mate while an investigation into pollution and damage to the marine environment continues, and they seek to sell the ship.

During the bizarre case of the 3,200 dwt cargo ship Vera Su, Bulgarian authorities have accused the captain of possibly intentionally running his ship aground or failing to maintain a proper watch. They also accused the Turkish ship management company of having an irresponsible attitude during the recovery operation, having little regard from human health, and ultimately of abandoning the ship.

The 33-year-old cargo ship was fully loaded with 3,300 tons of nitrogen fertilizer when it veered off course on a calm night and went aground on Bulgaria’s Black Sea Coast in a resort area near the village of Kamen Bryag. The vessel remained firmly aground, and it was ultimately decided that they would have to remove a portion of the cargo to free the vessel.

“In the course of the investigation, it was established that the captain allowed his vessel to sail with an inoperative bridge watch control system, and the navigational watch on the bridge overnight included only a watch captain without an observer,” said the prosecutor’s office. They charged the captain, Haidar Ergun, with causing damage to property and endangering lives. The captain was sentenced to three years in jail, but the sentence was suspended. He however will have to pay approximately $4,100 in fees.

Prosecutors are waiting for the court to return the case against the first mate and then an official indictment will be prepared and filed. They plan to charge this officer with negligence related to the same charges of causing damage and endangering lives. 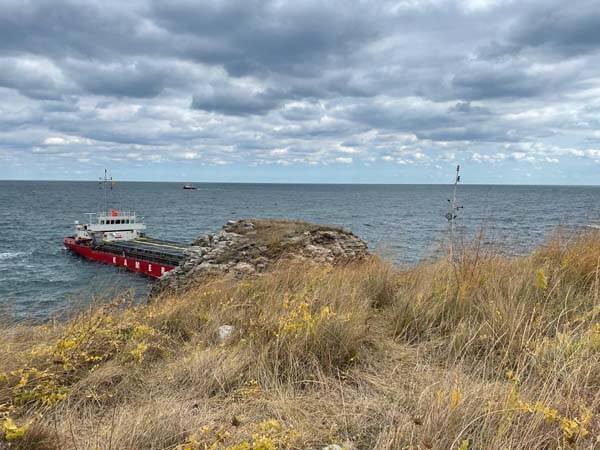 The Vera Su remained aground and ultimately breached her hull on the rocks partially sinking. Cranes were brought in along with equipment to offload the portion of the cargo. Once the vessel had been lightened, two tugs were able to pull it free of the rocks and it was moved to a Bulgarian shipyard in the port of Varna. During the operation, the Bulgarian authorities believed a portion of the cargo was lost into the sea.

Bulgaria’s Minister of Transport, Information Technology and Communications, Hristo Alexiev, also accused the shipowner of “deliberately not taking any adequate action to save the ship and its cargo,” which he said led to the sinking. The Minister told the media that the shipowner’s lack of action was “with the idea of receiving the revenues from the insurance."

Bulgaria presented a bill for $1.16 million to the insurers for costs incurred during the 36-day salvage operation. In the meantime, reports indicate the shipowner abandoned the vessel with the media saying it was not being covered by the insurance company.

The authorities are now moving to have the ship auctioned off. They said either the insurance company could sell it to reimburse the state or they would start an auction. The goal is to raise approximately $1.7 million from the sale.