The future HMCS Harry DeWolf, the first of Canada's new Arctic and Offshore Patrol Vessels to be built, was launched in Halifax Harbour on Saturday.

Construction of the second and third ships, the future HMCS Margaret Brooke and Max Bernays, is underway at Halifax Shipyard. Later this month, the first two major sections of Margaret Brooke will be moved outside.

In total, there will be six ice-capable ships, designated as the Harry DeWolf Class, after Canadian wartime naval hero Vice-Admiral Harry DeWolf (biography below).

The new vessels, with a complement of 65, will be capable of armed sea-borne surveillance, including in Canada’s Arctic; providing government situational awareness of activities and events in the region. 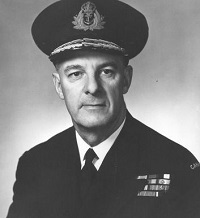 In 1939, then Lieutenant Commander DeWolf assumed command of the destroyer Her Majesty’s Canadian Ship (HMCS) St. Laurent and participated in Atlantic convoy escort duties, as well as the evacuation of troops from France in 1940. He was Mentioned in Dispatches twice (a national honor for distinguished service) for his leadership in command.

In 1943, Commander DeWolf assumed command of the Tribal-class destroyer HMCS Haida, a ship that would come to define his legacy as a warrior. Haida was known as the “Fightingest Ship in the Royal Canadian Navy.” During his 14-month tenure as commanding officer, Haida played a role in the destruction of more than a dozen enemy vessels, including three destroyers and a submarine. He was awarded the Distinguished Service Order for gallantry, the Distinguished Service Cross for courage and skill in action against German destroyers, and two more Mentions in Dispatches for bravery, courage and determination.

A consummate leader both ashore and afloat, his exceptional wartime service was recognized with an appointment as a Commander of the Order of the British Empire, and an Officer of both the United States Armed Forces Legion of Merit and the French Legion of Honour. He also received the French Croix de Guerre and the King Haakon VII Liberty Cross from Norway.

Following the war, he continued to excel, commanding the light aircraft carriers HMCS Warrior and HMCS Magnificent. In 1948, he was promoted to Rear-Admiral and in 1952, he was appointed Principal Military Adviser to the Canadian Ambassador to the United States and Chairman Canadian Joint Staff in Washington, D.C. In 1956, upon promotion to the rank of Vice-Admiral, he was appointed Chief of the Naval Staff where he served until his retirement in 1960.

Vice-Admiral DeWolf passed away in Ottawa on December 18, 2000, and his ashes were scattered at sea from HMCS Ville de Québec in 2001.

The tragedy at Beirut on August 4 highlights what happens when dangerous chemicals are not stored with care. The explosion tore through the city, registering a force as strong as a 3.3 magnitude earthquake. Residents claimed that the scenes looked “like an apocalypse” and that the port was “totally destroyed.” Tianjin 2015 This was not the first time such an incident occurred in a port. On August 12, 2015, a series of explosions killed 173 people and injured hundreds of...

In a decision issued Monday, the U.S. 5th Circuit Court of Appeals struck down the Trump administration's attempt to permit offshore aquaculture installations in federal waters, citing statutory limits on the authority of the Department of Commerce (and its National Oceanic and Atmospheric Administration). The 5th Circuit's decision upheld a previous 2018 district court ruling.  “We consider whether a federal agency may create an ‘aquaculture,’ or fish farming, regime in the Gulf of Mexico pursuant to the [Magnuson Stevens Act]....

In a rare instance, the U.S. Air Force’s northern most base, coordinated an international rescue and provided assistance for a commercial vessel in distress. Contractors stationed at Thule Air Base, Greenland, 750 miles north of the Arctic Circle, responded to the distress call using the Air Force's only tugboat to save six crew members and tow the ship to port for repairs.   At about noon local time on August...