Late today the Gibraltar Contingency Council set up to respond to the bulker damaged in a collision at the port officially declared a “major incident,” as the hull of the OS 35 ruptured and leaks have been spotted in the area. The declaration focused all the resources on managing the growing disaster while the neighboring port of Algeciras was briefed and assistance from Salvamento Maritimo was also requested.

Reports yesterday indicated that the bulker has suffered a gash on the starboard side of its 584-foot long hull that was estimated at nearly 33 feet in length and 13 feet in height. The bow of the vessel settled four feet into the sandy seabed while the stern remained afloat increasing the pressure on the hull. The Gibraltar Government warned that it increased the likelihood of further damage to the hull and was preparing for it while salvage teams also surveyed the damage.

After reporting earlier in the day that the situation had remained stable, during the afternoon the Gibraltar Port Authority announced that the vessel was beginning to break apart. They said, “The hull of the bulk carrier OS 35 has broken. The two sections of the vessel have not yet fully separated.”

The port had two tugboats and other vessels standing by and the decision was made to evacuate OS 35. They removed 24 crew members from the 35,000 dwt bulker registered in Tuvalu. In addition, six surveyors had been aboard when the rupture occurred and were also evacuated. 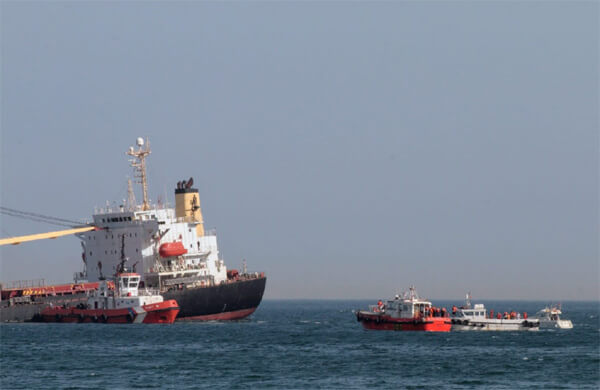 The concern is centering on the 183 tons of heavy fuel oil, 250 tons of diesel, and 27 tons of lube oil aboard the vessel. Yesterday, a small leak of hydraulic fluid from the vessel’s forward crane developed. The Gibraltar Port Authority responded by putting a containment boom around the vessel and another at the crane. The salvage team reportedly assessed that it would take at least 50 hours to pump all the fluids off the vessel and it had not begun before the hull ruptured. However, the salvage team reported that all fuel valves were isolated before the break occurred.

“There has been a substance leak from the vessel as a result of the movement arising from its break,” the government is now reporting. “Initial investigations indicate that this is lube oil. This lube oil is currently contained within the primary boom and all efforts will be made to remove it from the sea using a skimmer and sludge barge before it is able to leak from within the boom.”

Two vessels are being deployed with a “U” shaped boom in an attempt to capture oil that might leak past the primary boom. All the available booms have now been mobilized as the vessel is positioned less than 1,000 feet off Catalan Bay on the east side of Gibraltar.

As part of the major incident declaration, all other day-to-day operations at Gibraltar port have been stopped to ensure the availability of all resources. The neighboring Junta de Andalucía has also declared a pre-emergency phase, although so far, nothing has been reported to have reached the Andalusian coast.