The UK Marine Accident Investigation Branch has issued its final report into the collision of the car carrier City of Rotterdam and the cargo ro/ro Primula Seaways. It concluded that the incident was due to the pilot’s loss of situational awareness (disorientation) and the bridge team's failure to intervene, plus one strange contributing factor: a semicircular bridge design.

On the evening of December 3, 2015, the City of Rotterdam took on a pilot and prepared to leave the port of Inningham, England. While the vessel was outbound, strong winds and a pronounced tidal stream set her to the north, towards the inbound lane. The Primula Seaways was headed inbound making 14 knots, and the VTS watchstander alerted her of the Rotterdam's situation and the growing risk of collision. The Primula went to half ahead and put propulsion astern as the City of Rotterdam approached.

Aboard the Rotterdam, the pilot made a gradual series of course corrections to bring her back to the south, ordering a heading of 115, then 125 and then 135 degrees. The heading changes were not sufficient, and the vessels collided. The Rotterdam suffered damage below the waterline and a long gash along her port bow, and the Primula required about $3 million in repairs to her bow and forecastle.

Following a debriefing and a thorough review, the MAIB determined that the Rotterdam’s pilot failed to apprehend the developing risk of collision because he had experienced "relative motion illusion" – that is, he was mistaken about the ship’s direction of travel.

The City of Rotterdam's bridge windows are laid out in a semi-circle, not in a straight line as found on conventional vessels. Only the middle window looks ahead, and all other windows frame a view that is off of the centerline axis. This is against IACS class standards, but the Rotterdam was built under an exemption. 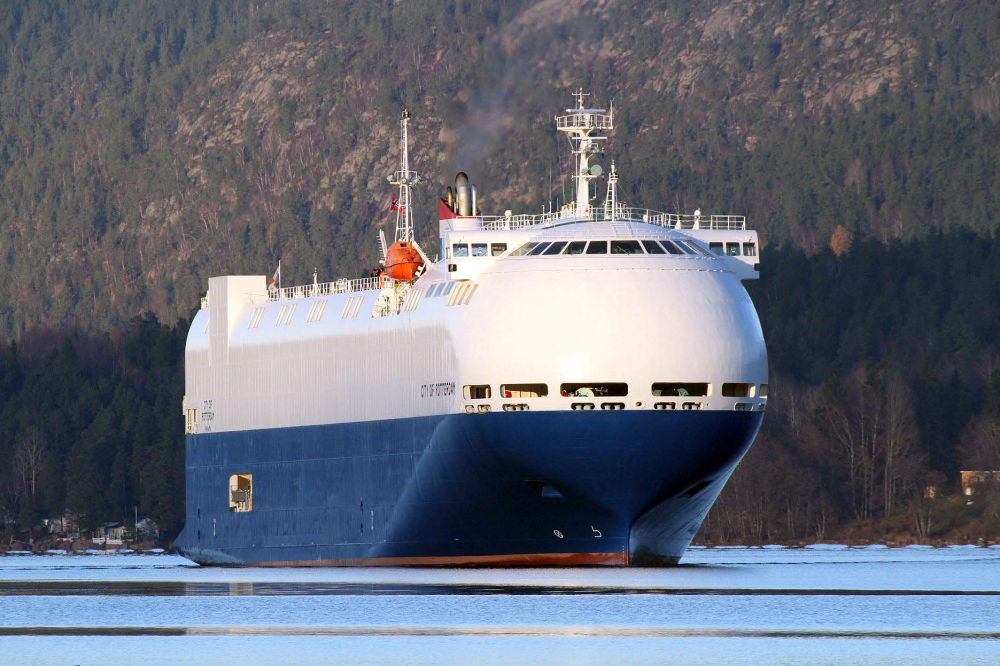 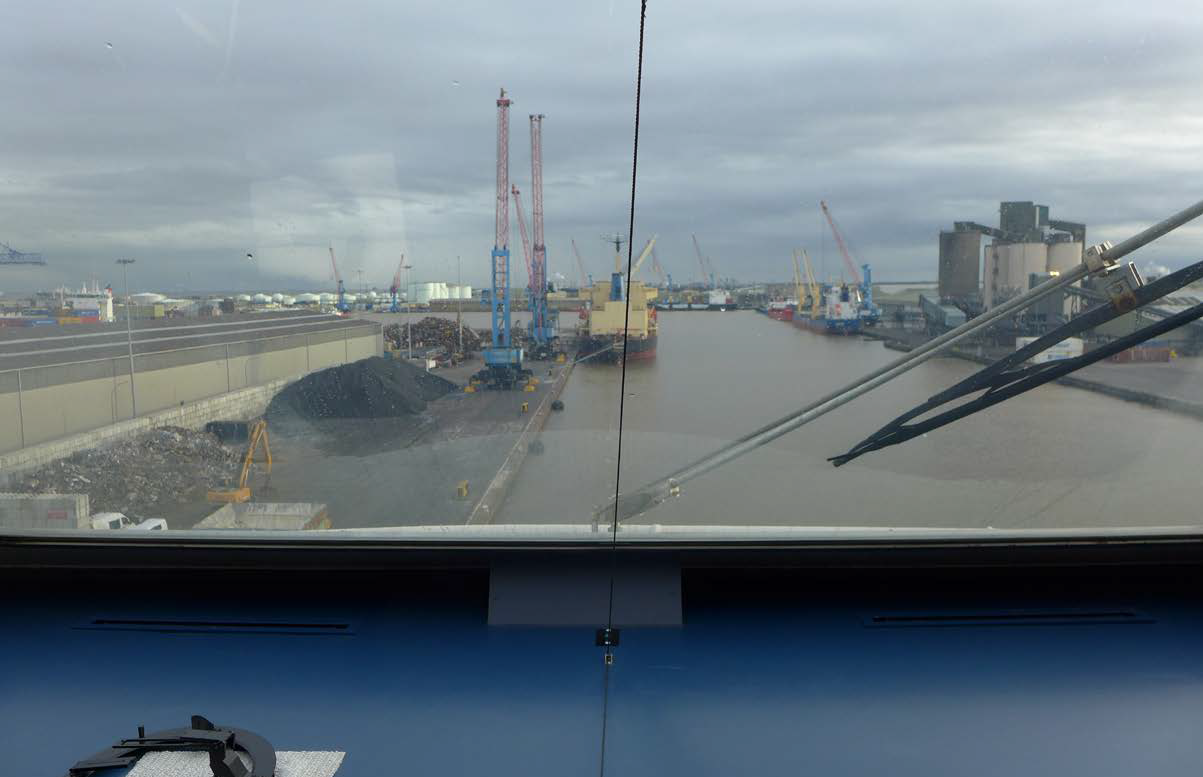 View straight ahead from the center window. The crew has affixed a piece of string up the middle to mark the centerline. 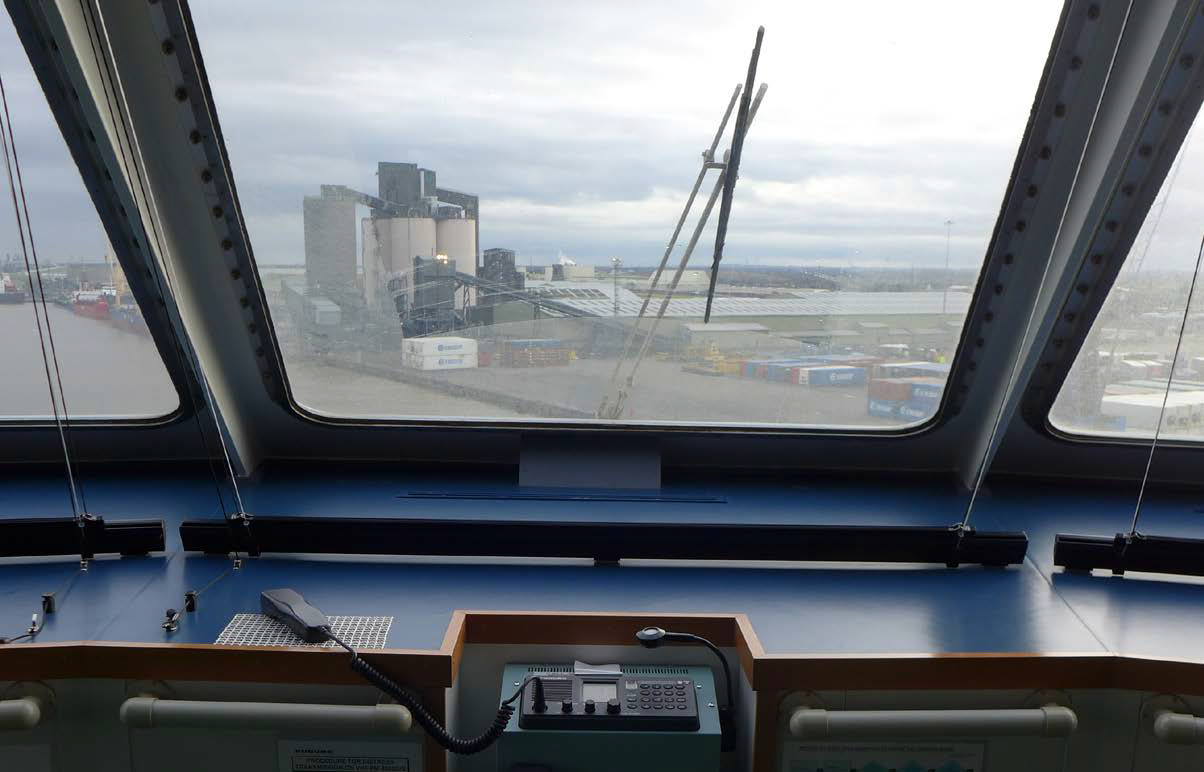 View “straight ahead” from the VHF radio mount, looking 33 degrees to starboard.

The MAIB commissioned an ergonomist to study the bridge layout, and the conclusions were not faborable. "The effect of standing at an off-axis window is that the observer loses all sense of orientation relative to the ship . . . The consequence of this for navigation is that objects are considered to move as though the ship were headed in the direction of the window," the consultant concluded. What is worse, "the nature of [these] relative motion illusions is such that they return immediately after being broken, even with regular reminders."

In the minutes leading up to the collision, the pilot had to walk to the starboard VHF radio, which left him looking out a window 33 degrees to starboard of the centerline axis. The MAIB found in simulation that as a consequence of this change in viewpoint, the pilot believed he was headed directly towards an anchorage bearing 148 degrees, when in reality the vessel's heading was 115. In addition, two separate simulation runs with two separate Humber River pilots found that they both made the same mistake: they perceived the vessel's apparent motion as the result of set or drift – not as a simple consequence of their off-axis viewpoint.

MAIB recommended a careful review of off-axis window designs, especially regarding the placement of equipment and points of reference. The location of the VHF radio off the bridge's centerline was particularly problematic, as it required the pilot to walk away from the best viewpoint for navigation.

"The City of Rotterdam’s pilot’s relative motion illusion deceived him into thinking that his view from the window . . . was the vessel’s direction of travel," the agency concluded. "There were no visual clues such as a forward structure or bow tip, [and] the illusion would have been compelling."