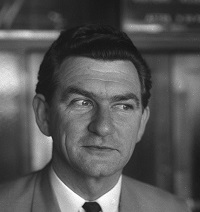 In 1956, Hawke joined the Australian Council of Trade Unions as a research officer. Having risen to become responsible for wage arbitration, he was elected president in 1969, where he achieved a high public profile. After a decade serving in that role, Hawke announced his intention to enter politics, and was subsequently elected to the House of Representatives as the Labor MP for Wills.

Three years later, he led Labor to a landslide victory at the 1983 election and was sworn in as prime minister. He led Labor to victory three more times, in 1984, 1987 and 1990, making him the most electorally successful Labor Leader.

In the video below (warning colorful language is used), Hawke demonstrates his humor and charisma as he shares a joke with 1983 America's Cup winning skipper John Bertrand and syndicate owner Alan Bond on the 30th anniversary of Australia II's victory.

The Hawke Government created Medicare and Landcare, brokered the Prices and Incomes Accord, established the Asia-Pacific Economic Cooperation (APEC), floated the Australian dollar, deregulated the financial sector, introduced the Family Assistance Scheme, announced "Advance Australia Fair" as the official national anthem, initiated superannuation pension schemes for all workers and oversaw passage of the Australia Act that removed all remaining jurisdiction by the United Kingdom from Australia.

He is remembered for American and European banks to add financial sanctions to existing South African trade sanctions - this led to the release from prison of Nelson Mandela and the dismantling of apartheid. Allan Gyngell also reports in The Interpreter, that Hawke was proud of his efforts to persuade the Soviet leader, Mikael Gorbachev, to release a list of Soviet Jews for immigration to Israel in 1987. His other successes include the South Pacific Nuclear Weapons Free Zone, the creation of the Australia Group to improve export controls on substances used to make chemical weapons, and the Chemical Weapons Convention itself.

“He was a loyal respected and consistently determined friend and comrade of Australian seafarers, waterside workers and port and harbor workers,” said Paddy Crumlin, national secretary of the Maritime Union of Australia.

“As a trade union official he supported and, in return, was supported by Australian maritime workers. His rapport with the union and its leaders included Charlie Fitzgibbon, Eliot V Elliott, Norm Docker Tas Bull and Pat Geraghty. During those years, he secured a functional, productive, safe and progressive Australian waterfront and a merchant navy that was essential to Australia’s National interest. This is incremental both economically, through security and defence and the servicing of our widespread economic centers and in the premier role of our export and import industries to our national growth and development. Bob knew a sure and reliable waterfront and shipping industry was also a balancing factor to the dominance of foreign shipowner monopoly of those essential services.”

He built on these trade union values as Prime Minister, says Crumlin, helping to build these industries in the national interest through fiscal reform, labor reform and consensus building across all the shareholders in the industry. “This was at the core of the so called transformative nature of his political leadership. A commitment to consensus building based on real compromise and mature and objective review. Combined with his personal charisma, great good humor, knock around humility and articulate intelligence he was an accumulation of the best of political and personal attributes of any of those that commit themselves to public life and service.”

Hawke was known as a tireless activist for human, civil and trade union rights over his public life and into his retirement. “Vale our old comrade, a long life well invested in others in the finest traditions of leadership, a person of family, fighter for peace and justice who was indefatigable in his efforts to bring about a better world for all that reside here.

“Fair winds and a following sea for your rest,” says Crumlin.