The Royal Navy's first-in-class patrol vessel HMS Forth was delivered with multiple deficiencies, including broken bolt heads that had been reaffixed with adhesive, according to a report obtained by Scottish paper The Herald.

The first new Batch II River-class OPV, which just entered service last month, was found to have over 100 defects on board. While it is not unusual for a new ship to undergo a shakedown period after delivery, especially if it is the first in its class, some of the defects were of an unusual nature. Prominent errors included flawed work on life raft davits, where bolt heads were found "to have been cut off and glued in place."

In an internal document provided to the paper, shipbuilder BAE Systems called on its staff to improve their work. “Our reputation has seriously deteriorated on the back of recent business-wide operational performance and we all need to take action to improve this,” the memo said. “We need everyone in Naval Ships to consider what the barriers are to right first-time performance in your area and identify solutions that you and your team can apply.”

In a statement, BAE said that “we are aware of an issue with a limited number of bolt fastenings on board HMS Forth. These did not present a risk to the mechanisms that secure the life rafts to the ship.”

The Royal Navy is not the only service experiencing problems with its smaller ships. In a recent audit report, the U.S. Department of Defense Office of the Inspector General (DODIG) determined that the U.S. Navy's eight Expeditionary Fast Transport (EFS) vessels do not meet expected requirements for cargo transportation or cybersecurity protection. The Navy's contract provides for the delivery of another four ships in the class, all to be operated by Military Sealift Command (MSC).

"Navy officials accepted eight EPF vessels with deficiencies that could prevent the MSC from accomplishing missions," the auditors wrote. "The Navy may also have to spend additional money to achieve the required performance capabilities for EPF vessels that were already provided to the fleet and for future EPF vessels that are still in production."

Under the Navy's contract requirements, the EPF vessel was to transport about 550 tonnes of cargo for 1,200 nm at an average speed of 35 knots. During testing, it only achieved a range of about 770-850 nm at 31 knots with the rated payload. The audit found that these shortcomings were not corrected. 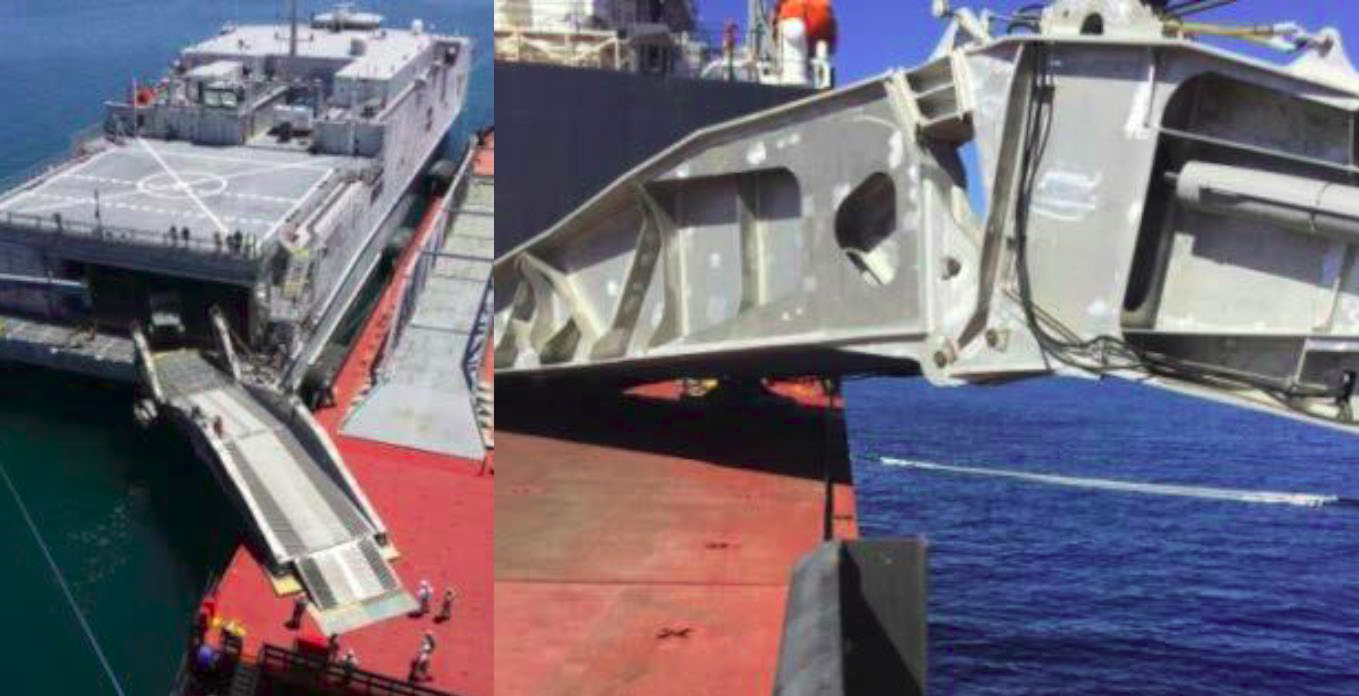 In a related cargo requirement, the EPF was intended to handle ship-to-ship lightering operations using its stern ramp and a floating dock (image above). The standard called for it to perform this particular mode of cargo transfer in waves over four feet, or at minimum, in waves over four inches (0.1 meters). The vessel successfully completed the stern ramp transfer evolution in waves of 12 inches in a protected harbor, but was not capable of the task in the open ocean with waves of 20 inches (0.5 meters). The Pentagon's Director, Operational Test and Evaluation (DOT&E) assessed that it could not perform this task at sea.

In addition, the Navy officials responsible for the EPF program found 14 deficiencies related to "information assurance controls," the shipboard cybersecurity systems that ensure the availability, integrity, authenticity, and confidentiality of information exchanges. DOT&E reached similar conclusions, and DODIG found that these cybersecurity issues may not have been corrected. Despite potential issues with communications security, the Navy is reportedly considering the EPF class for use in a small-scale command ship role in the Western Pacific.