Australia has been preparing its live export logistics supply chain for months in readiness for the Muslim Festival of the Sacrifice on September 1.

The festival, known as Eid al-Adha in the Middle East and Korban in South East Asia, sees an annual spike in demand for live animals.

Australian Livestock Exporters’ Council (ALEC) Chairman, the Hon. Simon Crean, says months of collaborative planning and preparation by industry has been done in the lead-up to provide animals to meet demand and to ensure that Australian welfare standards are met.

“Not only does the Festival of the Sacrifice place considerable pressure on Australia’s world-leading control and traceability livestock systems, it also places increased attention of the integrity of our supply chains,” Crean said.

“Our industry welcomes that scrutiny, because we are proud of the continuous improvements we’re achieving and we do not shy away from the challenges and risks inherent during these busy periods.”

Crean said poor welfare outcomes were never acceptable and that ALEC believed the relevant powers regulating livestock export supply chains should be exercised in response to any deliberate breaches.

Under Australia's Exporter Supply Chain Assurance System (ESCAS) requirements, Australian livestock must not be sold outside of approved supply chains and cannot be purchased for home slaughter or for slaughter at facilities which do not meet the international animal welfare standards embedded in ESCAS.

“I have seen first-hand the genuine commitment to continuous improvement from importers and abattoir operators,” Crean said. “Greater vertical integration in the supply chain, the growth of closed-loop feedlot and abattoir facilities and ticket sale systems which remove interaction between livestock and customers are all very positive initiatives.

“Our industry’s objective is to continue to work with our international customers to identify and control any risks in the supply chain, and respond promptly whenever the welfare of Australian livestock is threatened. Despite our best efforts, we accept that no system is 100 percent fail-safe and that the biggest risk to the welfare of Australian livestock is leakage from approved supply chains.

“Exporters have already been pro-active in reporting and rectifying supply chain leakages in-market in recent weeks and will continue to monitor local markets and abattoirs for any non-compliance.”

The 2017 festival period would be underpinned by joint initiatives between exporters and their customers, including:

• Streamlined supply chains, including pre-sold carcase (carcass) systems, in markets such as Qatar and Kuwait

Australia is one of 130 livestock exporting nations worldwide and exports approximately 10 percent of the total number of live sheep traded globally. Australian livestock exporters will only supply a smaller relative percentage of the overall numbers of sheep during the festival period in the Middle East, with significant local supplies and large volumes of imported livestock from Africa and Europe.

As trade volumes increased ahead of the high-demand festival period, Australia exported its one millionth live sheep for 2017 earlier in August, more than three-quarters of which departed from Fremantle. Kuwait and Qatar have imported more than 330,000 thousand head each, with much of the balance going to other markets in the Middle East. 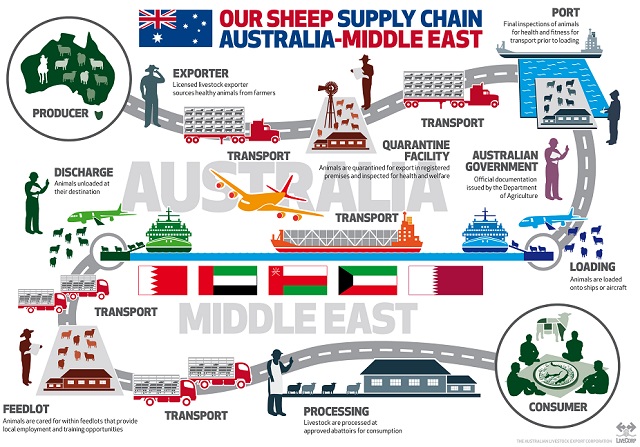