The Australian Transport Safety Bureau (ATSB) has released its preliminary report on the collision of the cement carrier Goliath with two moored tugboats at the port of Devonport, Tasmania in January. The board's conclusions have not been released, but the facts of the incident include a steering mode discrepancy during harbor maneuvering.

On the morning of January 28, the Goliath approached the port of Devonport to call at the bulk cement terminal. She entered the port at about 1130 hours, with the master on the bridge, and slowed as she approached the swing basin opposite the terminal. At about 1145, the master had the second mate transfer engine and rudder control to the port bridge wing maneuvering station and set the controls in joystick mode. His practice was to maneuver using the main engine telegraph for power control; the bow thruster control; and the joystick for the specialized VecTwin rudder angle control, according to the ATSB.

“Ships fitted with the VecTwin twin-rudder steering system can be maneuvered at low speed with thrust from the propeller redirected as required by the two rudders, controlled by a joystick,” explained ATSB Chief Commissioner Angus Mitchell in the report. “The system allows astern thrust to be generated using ahead inputs on the main engine without the need to stop the engine and engaging astern propulsion, as would be required for conventional ship maneuvering.” 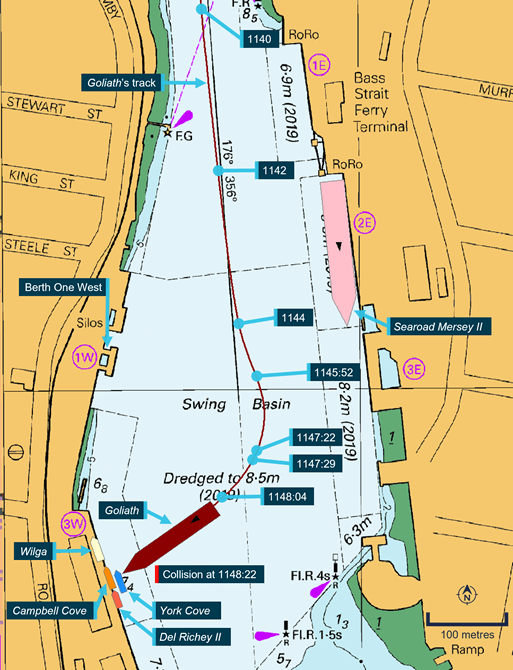 As the ship moved into the basin, the master took the helm at the bridge wing station and moved the VecTwin joystick to the "astern to port" setting. However, he determined that the ship was not turning as quickly as he had expected. He put the joystick to the "astern" rudder angle setting, then put the engine telegraph to half ahead, then quickly to full ahead at 1147:41. Under the joystick setting and rudder orientation selected, "full ahead" would be expected to produce astern thrust and slow the ship. However, by 1148:04, the vessel had picked up speed to four knots and was still accelerating.

As the ship closed in on the wharf, the master looked at the rudder angle indicator and determined that both rudders were amidships - not the rudder angle set on the VecTwin joystick. He called out to the second mate to tell him that the vessel was not in joystick steering mode (it was in manual mode) and he put the telegraph to all stop. At about 1148:22, Goliath struck two moored harbor tugs at a speed of 4.7 knots. The tugs York Cove and Campbell Cove were badly damaged and began flooding. 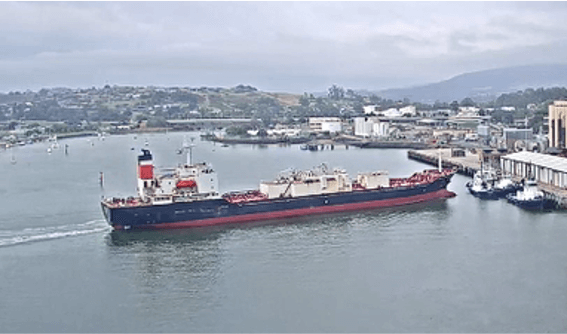 While the collision unfolded, the second mate switched the bridge console's steering mode selector to joystick mode. The master put the engines astern and maneuvered the ship to her berth, and the crew carried out tank soundings.

No injuries were reported, but by the evening, both of the tugs had gone down in about 20 feet of water. First responders put out containment boom around them to reduce the spread of fuel; salvors ultimately pumped out about 18,000 gallons of diesel from the two vessels.

The tugs were both declared a constructive total loss. The Goliath was in better shape, but she still suffered damage to her bulbous bow and some of her hull plating on the starboard side. By February 10, she was fully repaired and returned to service.

The initial report lays out the evidence collected in the ATSB's fact-finding investigation, but it does not include a root-cause analysis. A full report with conclusions is expected in due course.

“The investigation is progressing and the ATSB will review and assess the ship’s safety management system and navigation procedures, the effectiveness of bridge resource management on board, and review past incidents involving Goliath,” Mitchell said. “Investigators will also examine TasPorts’ pilotage exemption processes and port procedures, as well as the shore pollution response.”